Sunday’s series premiere begins with the tragedy of the titular 1987 crash — still the largest one-day drop, percentage-wise, in Dow Jones history — and the mystery of who, exactly, plunged to their death right into a stretch Lamborghini on that fateful day. (Our only clue is an emerald pin on the victim’s tie.) Then it backs up a year to tell the untold story of how the crash actually happened, steeping us in the adrenaline-soaked world of high-stakes stock trading. This is 1986, mind you, and most of the characters take a very casual approach to drug use, profanity, greed, sexual harassment… and ethics in general. 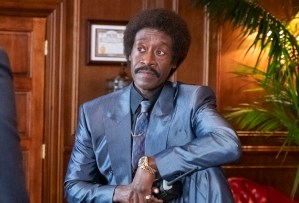 Don Cheadle stars as maniacally ambitious stock whiz Maurice Monroe, dubbed “the Billy Ocean of trading,” and his performance alone makes Black Monday worth watching: Maurice is a force of nature, literally kicking down doors to secure a spot for himself in the rich old white men’s club. In his pursuit of financial supremacy, he takes under his wing dorky newcomer Blair (Andrew Rannells), who’s developed a coveted trading algorithm. (Rannells is a terrific comedic actor, but here, he’s often relegated to the role of straight man, leaving his skills frustratingly untapped.) Regina Hall is a treat, too, as Dawn, the lone female employee at Maurice’s company who proves she can be just as gross as the boys.

Maurice does run a proudly profane workplace: It’s actually a bit reminiscent of Veep, with the traders constantly rattling off mean-spirited four-letter digs at each other. Happy Endings creator David Caspe is a co-creator here, and Black Monday shares that show’s love of rapid-fire gags; it’s often laugh-out-loud funny, and the cast has instant comedic chemistry. It also mines a lot of laughs by reveling in gaudy ’80s nostalgia: floppy disks and shoulder pads, the aforementioned stretch Lamborghini (aka a “Lambo limo”) and a robot butler who dutifully fetches cocaine. But there are hints of melancholy around the edges, too, and a plot twist at the end of the pilot that actually adds a level of intrigue to what follows. 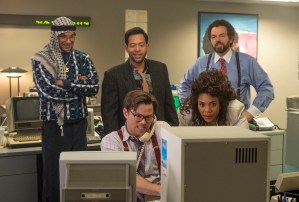 Admittedly, some of the more over-the-top gags don’t land — like Ken Marino playing twin Lehman brothers, and Casey Wilson as Blair’s Lady Macbeth-esque girlfriend — and it runs the risk of being too callous at times. (Paul Scheer’s trader Keith snatches a coveted Nintendo from a children’s hospital ward to give to his son. Oof.) But Black Monday already feels like one of those shows where the acting and writing are so sharp that even if an individual episode is subpar, it’ll still have two or three priceless one-liners to tide us over. Veep is entering its final season, and Happy Endings is long gone (R.I.P.), so if you’re in the market for wicked comedy on that same wavelength, Black Monday is shaping up to be a smart buy.