True Detective is back on the case: HBO’s crime anthology returned for a third season on Sunday night with a densely plotted two-hour premiere — will you keep following the clues? 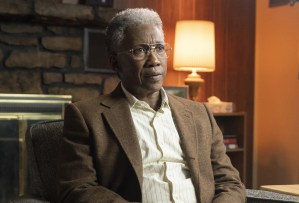 After a typically evocative credit sequence, we head to rural Arkansas, where we meet state police detective Wayne Hays, played by Oscar winner Mahershala Ali. The mystery plays out across three time periods: In 1980, Hays and his partner Roland West (Stephen Dorff) are called in to investigate after two local kids — Will and Julie Purcell — go missing one night. But we also see Hays ten years later in 1990, facing fresh questions about the Purcell case when the family of the man convicted seeks to overturn it, and again in 2015 as an old man battling dementia, making audio tapes for himself to keep his mind straight. (“You’re having memory problems,” he tells himself. “Don’t whine about it.”)

In 1980, Hays and West are idly sipping beers and shooting at rats when they decide to go out on patrol and get a call about the missing Purcell kids. (“Almost had a clean night, man,” West sighs.) Will and Julie rode off alone on their bikes, and though their dad Tom (Scoot McNairy) warned them to be home by sundown, they never came back. There’s no shortage of suspects, including Freddie Burns, the older teen who stole Will’s bike that night, and Woodard, a loner who rides around town in a go-kart collecting trash. Tom and his wife Lucy (Mamie Gummer) are sleeping separately, too, and a search of Will’s room turns up a stack of Playboys under the mattress… and a hole drilled in the closet wall that peers into Julie’s room. 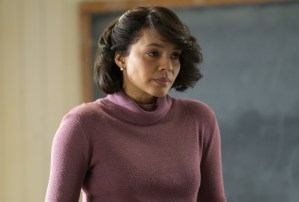 The 2015 version of Hays sits to be interviewed for a true-crime documentary about the case, and tears up when talking about his late wife: “Guess I’m just missing her today.” (His wife also wrote a book about the case that became “a classic of literary nonfiction,” the doc’s producer notes.) Back in 1980, we see him meet his future wife: Amelia (Carmen Ejogo), a teacher at Will and Julie’s school. Hays is transfixed while watching her read poetry to the class, and during questioning, his queries eventually turn personal. (They bond over being two of the only black people in town: “How is it here? You know.” “They’re careful around me.”) They hit it off right away, and he gets her phone number — strictly professionally, of course.

In a search of Woodard’s house, they discover he’s a Vietnam vet — as is Hays, who did long-range reconnaissance during the war as a tracker. His elite tracking skills lead him to follow tire tracks and footprints, and during a search of the local park, he stumbles upon a creepy cornhusk doll shaped like a bride, and then another. He ends up in a remote cave… where he finds Will’s dead body, his hands neatly folded like another little doll. A shaken Hays radios for help — and then in 1990, Hays learns that Julie’s fingerprints turned up after a recent pharmacy robbery. She’s still alive. 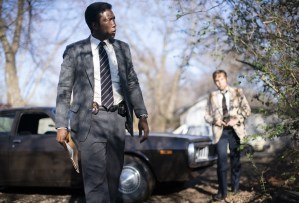 The second hour begins in the aftermath of Hays discovering Will’s body; an autopsy shows the boy died of blunt force trauma, after his neck was broken. He and West interrogate Woodard, and while the two Vietnam vets bond over their service, Woodard bristles when West asks, “You like kids, generally?” (“What the f–k’s the right answer to that?” he fires back.) At a town meeting, the locals demand answers, and complain that the park, known as Devil’s Den, has become a cesspool of drugs and crime. Hays reconnects with Amelia there, and asks her to see if any of her students know anything about the cornhusk dolls. Their love connection takes a hit, though, when another man comes to pick her up.

At Will’s funeral, Hays and West take the opportunity to corner Lucy’s cousin, who crashed with the family a few months back and stayed in Will’s room. He admits to leaving the Playboys, but says the night they went missing, he had a couple drinks at a bar and then “went home and watched CHiPs.” Tom’s mother, meanwhile, says Lucy’s been running around on her son — and even thinks Tom might not be Julie’s father. Amelia helps uncover another clue when a kid at school remembers someone in town handing out those cornhusk dolls on Halloween… and Julie came home with one. 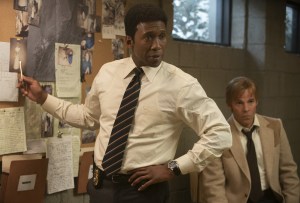 Hays takes the doll tip to the local prosecutor, and suggests they do a low-key search of every house on Julie’s Halloween route. The prosecutor doesn’t like that idea, though, and while Hays and Amelia are enjoying a drink together at a bar, the prosecutor goes on TV to announce the doll tip to the whole town — essentially blowing Hays’ lead. He’s pissed, and even lashes out at West for not sticking up for him with the white prosecutor: “They ain’t my tribe.” But they still team up to track down Ted LaGrange, a sex offender who was asking around about young girls at an adult bookstore.

They haul LaGrange off to an abandoned barn and rough him up, despite his pleas that he had nothing to do with the Purcell kids. They tie him up and toss him in their trunk, with Hays peppering him with graphically violent threats that I’d rather not rewrite here — but they get called back to the Purcell house when the family receives a cryptic note: “Do not worry. Julie is in a good place and safe. The children should laugh. Do not look. Let go.” Back in 2015, the older Hays’ mind is still foggy: He asks his son the same questions twice at dinner, and then finds himself out on the streets in the middle of the night in his robe and pajamas, with no idea how he got there.

What’d you think of the True Detective premiere? Grade it in our poll, and then hit the comments to share your early theories about whodunit.