If you made a New Year’s resolution to swear off dating apps, I have excellent news for you: Dirty John‘s season finale will make you want to delete them for good.

Bravo’s adaptation of the Los Angeles Times podcast came to an intense conclusion on Sunday night, as John’s anger at Debra reached a boiling point. Before you tell us what you thought of the finale, here’s what went down in the hour:

In the wake of John’s car-burning scheme, Debra informs her lawyer, Michael, that she’s heading to Los Angeles for a business trip. The way Debra sees it, she could either wait around for John to do something else insane, or she can continue living her life. But Michael is concerned that John is getting angrier, and his attempts at revenge will only get more dangerous — and it seems he’s right to be worried, since John has actually driven out to the desert and dug a hole large enough to fit a body.

A few weeks ago, we watched via flashback as young John got a lesson from his father: If you want to get revenge, you don’t go after them. You go after their family. In Sunday’s finale, John takes that advice — er, “advice” — to heart, targeting Debra’s daughters instead of Debra herself. First, he drives over to Veronica’s apartment building, and he waits outside in his car for one of the Newell women to make an appearance. But his plan is foiled by Veronica herself, who spots John parked outside when she arrives home from a night at the club. When John realizes he’s been caught, he speeds off, and Veronica’s Uber driver is nice enough to literally participate in a car chase through busy California streets… until John turns onto the freeway and they lose him. Veronica then heads to sister Terra’s apartment to make sure John doesn’t show up there — and he doesn’t. But the next morning, Veronica warns Terra that she needs to be on the lookout for a black four-door sedan with broken brake lights, which she’s fairly confident is the vehicle John drove the previous night. 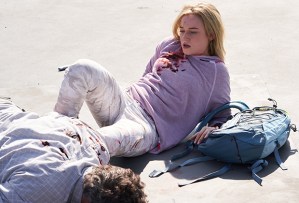 Veronica’s description, though, turns out to be wrong. In the darkness, she thought John’s car was black, but it’s actually blue. And the brake lights aren’t really out, either: John had merely disconnected them while he was parked outside Veronica’s place, and he reconnects them shortly after the late-night car chase ends, all but ensuring that Terra won’t spot him.

The following day, Terra plans to go to a weekend-long music festival with a friend; she’ll leave straight from work, pick up her BFF, and they’ll be on their way to wearing fringe tops in the desert, or whatever California music festivals entail. But Terra later realizes that she left her packed suitcase at home, so she makes a pit stop at her apartment before picking up her friend — and just as she’s walking up to her building, John attacks her with a knife in the parking lot.

Fans of the Dirty John podcast know that the real-life Terra was an avid Walking Dead viewer, and she took mental notes on how to fight zombies, in the event of an actual apocalypse — mental notes that ultimately served her well when John blindsided her. And, to Bravo’s credit, the show seems to accurately depict what really happened during the attack: Terra bites John’s hand and blocks his stabbing attempts with her backpack, while her sweet dog, Cash, nips at John’s feet and pulls at his pant leg. John does slash Terra’s elbow, causing her to fall, and she kicks at him tirelessly until finally, the knife slips out of John’s hand and lands on the pavement next to Terra. She grabs it just as he’s reaching for it, then stabs him countless times in his back and arms, ultimately finishing the job by pushing the knife — ack! — through his eye.

Though Terra doesn’t technically kill John in the parking lot, her stab wounds do leave him brain-dead, and John’s sister gives the hospital the go-ahead to pull the plug on him. Of course, there are aftershocks that linger after Terra’s encounter with him, even once he’s been cremated: Terra is wracked with guilt that she ended another person’s life, and Debra regrets that she ever got involved with John in the first place.

But at the end of the hour, the Newell family begins to heal a bit. No charges are brought against Terra, as she was acting in self-defense, and Debra’s mom assures Debra that the family has already forgiven her for being blinded by love. And when Los Angeles Times reporter Christopher Goffard (voiced by the real Christopher Goffard!) gives Debra a call, asking if she’d like to share her experience with John, Debra decides she’s ready to tell the whole story, in the hopes that she can protect other people from going through the same nightmare.

With that, I hand it over to you. What did you think of Dirty John‘s season finale? Grade the episode in our poll below, then drop a comment with your full reviews.