How much have you Bandersnatched?

Heading to the new year, Netflix sprung on us Black Mirror: Bandersnatch, an interactive movie that follows Stefan (Dunkirk‘s Fionn Whitehead), a wannabe videogame designer, and his fateful encounter with industry icon Colin Ritman (Maze Runner‘s Will Poulter). As Stefan pursues an adaptation of Bandersnatch, a Choose Your Own Path fantasy novel by (the uxoricidal?) Jerome F. Davies, viewers are intermittently prompted to choose Stefan’s next response/action. The results range from merely cosmetic and sometimes moot to occasionally very deadly.

Theoretically, there are “one trillion possible paths” the viewer can take, leading to five-to-12 official endings (all of which have been documented here and there across the Internet). Now that everyone has had ample time to sample Bandersnatch (but before talk of a lawsuit arose), TVLine spoke with Black Mirror cocreators Charles Brooker and Annabel Jones about the ambitious enterprise, favorite moments, well-hidden Easter eggs and a possible follow-up.

TVLINE | Every time I write or talk about Bandersnatch, I catch and ask myself: Do we watch this or do we play it?
CHARLIE BROOKER | We withstand it. [Laughs] Good question. We still dont quite know…. You “absorb” it.

TVLINE | You have said that doing this was the equivalent of producing four Black Mirror episodes. That said, were lessons learned? Are there any efficiencies to be had if you or someone attempt a second one?
ANNABEL JONES | I think it would be more efficient not to do it. [Laughs] It was a big learning curve.
BROOKER | It was a big learning curve, and then another learning curve. There was originally a central, quite complicated conceit that we stripped out out that I am now slightly mourning. It was a bit too arcane to get in there, but it had to do with the phone number of the psychiatrist [Dr. Haynes, played by Alice Lowe]. In the flashbacks each time you fail, the idea was they get shorter and shorter and shorter until you realize you’re being read a number. We did retain that for one path, for a bit where you enter a [phone] number, but that was going to be one of the central puzzles. You had to go around three times and on the third time you realize, if you listen carefully, that a number is being read to you. “Two-Oh-Five….”

There was a problem that it was not clear to people. It was in it for a long time, where you literally could not complete this until you had done that, but it was proving too off-puttingly odd and difficult for people to guess that number. So I say to myself, “Don’t try anything that f–king smartass.” [Laughs] And also, because Stefan is aware that you are issuing him commands, if you were doing another story that was interactive, you’d have to find a way of squaring that circle. You either do it in a real POV sort of way, or you have to come up with some logistical reason why there’s an interface between you and the main character. 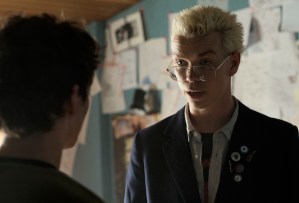 TVLINE | Was there any character that at an early point existed but that you just couldn’t fit it into the story? Like maybe a romantic interest for Stefan?
BROOKER | Apart from Colin, you mean? [Laughs] I kept adding more and more Colin, actually.

TVLINE | Will Poulter was fantastic.
BROOKER | I mean, they’re all great. Will is lovely, and he was so committed.
JONES | He is such a charismatic character, and just so skilled. He can be the most hateful character to this enigmatic, charming geek god.

TVLINE | Maybe that is why I first threw myself off the balcony — to save Colin.
BROOKER | “I won’t harm a hair on Colin Ritman’s head!” But then Colin’s quite nonchalant about [jumping], isn’t he? Have you done the timeline where you kill Colin in the bedroom?

TVLINE | No. Maybe it is for the Sugar Puffs crowd…?
BROOKER | No, but you must bury the [dad’s] body. But I’ll save that one for you. 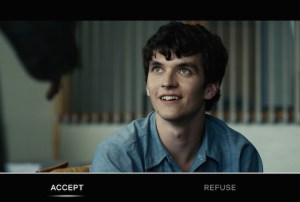 TVLINE | Did Netflix give you a heads up that this wouldn’t work with certain devices? [Bandersnatch isn’t supported by Chromecast, Apple TV and some older devices.]
BROOKER | We’d shot one of the [Black Mirror] Season 5 episodes before we’d started shooting this, so we weren’t sure if we were going to make this part of Season 5 or a standalone. But because we weren’t sure how many devices it would work on—

TVLINE | — you didn’t want to risk having the viewer get to an episode they can’t experience.
BROOKER | Exactly. But actually, the number of devices it could work on kept expanding. And also, the seamlessness with which it works and the speed with which it works just kept improving, to the point I was hoping it would get to but didn’t believe it could get to. Watching it on the TV I think is the best. You can watch it on the Xbox, and if you do the controller vibrates.

TVLINE | I found myself wishing the decision window was five seconds instead of 10.
BROOKER | It’s interesting because it started out as 10, because that was the technical limitation. [It takes 10 seconds for Netflix to cue up both of the possible resulting paths.] But now we probably could be a bit shorter.
JONES | Originally it was going to be 20!

TVLINE | Really? Who’s got time for that?
BROOKER | We thought that 10 was way too long, that it’d feel like an eternity, but I think that because of the music and how the dialogue keeps flowing, and because you feel the pressure of making the decision, a lot of people feel it’s not enough time.

TVLINE | Is this an “every five years” kind of thing, for the Black Mirror franchise?
BROOKER | Colin Ritman knows the answer to that. While doing it, Annabel and I both said at various points, “We’re not doing this ever again.” But like someone who has gone through the horror of childbirth and has forgotten about it in time to conceive again, I started thinking, “Oh, there’s an idea! You could do this, or you could do that…” I can’t work out how foolhardy that is, because forewarned is forearmed. You know things not to do, but you’d still end up in different pickles….
JONES | But all your [specialized production] tools would have been created, rather than having to invent the process.

TVLINE | Do you have half of a half of an idea for another one?
BROOKER | I can think of many things things you could do — maaaaany things you could do, and approaches you could take. But the key is you need to find a good reason to be doing it like that. This is not anything new, but the fact that it’s on Netflix is new. But you’d have to have a good reason, just as if you were doing a musical, for this to be the core of it. 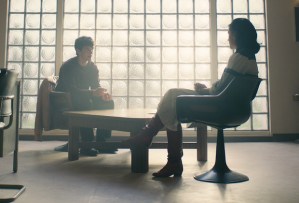 TVLINE | I played through again and again until my game earned a 5-star rating. Are you hearing that’s the objective for most people?
BROOKER and JONES | Yes!
BROOKER | We didn’t necessarily expect people to be as completist as they are. We thought that people would just get to a couple of endings and then walk away. Clearly, people are more keen on seeing all the endings than I thought.

TVLINE | Is there a specific combination of decisions — like, left option-right-left-left-right-left… — that will unlock something secret? Maybe flash the creators of Atari’s Adventure on-screen?
BROOKER | I did say, “Oh, can we put the Konami code in?” at one point, but it was not possible. The closest we get is there is an Easter egg in the form of a downloadable bit of software. And I did want to put in at one point a thing where if you dialed 999, which is the number for the emergency service in Britain, you got the police, and if you dialed 911, I wanted an American cop to answer. But once you start opening that Pandora’s Box, you’re f–ked.

Oh, there was one other thing I wanted to do: There’s a bit where he gets a VHS tape and watches a documentary. I wanted you to choose which tape to put on and if you chose the film you could watch the entire thing from beginning to end, in real time. Like, we’d license Guns of Navarone. [Laughs] But we didn’t, sadly, get a chance to do that. 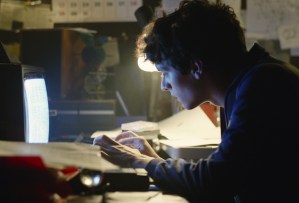 TVLINE | Have you received any numbers or stats from Netflix yet? Completion rates, average time spent…?
BROOKER | Actually, it turns out that me, Annabel and you are the only people who have seen it. [Laughs] No, they never really tell us numbers, and I’m quite pleased about that, because you don’t get to worry about them. But I’m sure that at some point they will tell us which bits people didn’t get to, or how many people saw it through to the end….
JONES | How many people killed their dads for real….
BROOKER | How many people sketched the white bear glyph in blood immediately after watching it…. It’d be interesting to know that type of thing.

TVLINE | I was surprised to see you doing post mortem interviews on the day of release. I figured you or Netflix would want people to tinker for a week or two and then you drop the hammer. “Here’s all the stuff you can do….” And then we all dive back in again.
BROOKER | People found stuff much quicker than we expected. Like, that Easter egg with the downloadable bit of software, we thought someone might find that after a couple of weeks, and it was probably within two hours. “Hey, I got this and put it into an emulator…!” But there is one bit you can’t find because by accident you can no longer access it.
JONES | Not by accident. We just couldn’t take it out.
BROOKER | We simplified something, and it meant there was a chunk of video we mixed even though it became pointless because no one would ever see it! That’s how dedicated we are to the cause.