That chill weekend jam you requested has arrived — and it’s dressed to kill. Netflix on Friday released the theme song and opening title sequence for its upcoming Carmen Sandiego reboot, and while it may not get your blood pumping quite like the iconic Rockapella version of yesteryear, it fits the new series’ mysterious vibe quite nicely.

With Jane the Virgin‘s Gina Rodriguez voicing the title role, Netflix’s Carmen Sandiego shifts from the focus from “where” the iconic criminal may be to “who” she really is, exploring her history with the V.I.L.E. Training Academy — a shadowy organization she has since dedicated her life to stopping. Along the way, she’ll be helped by a “player,” voiced by Stranger Things‘ Finn Wolfhard. 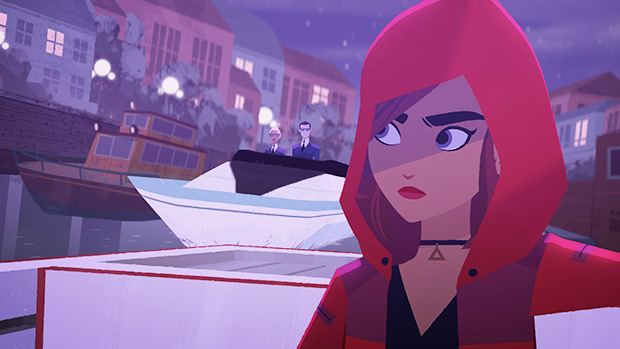 Here’s the show’s official logline, per Netflix: “Carmen is a modern day Robin Hood traveling the globe and stealing from V.I.L.E. and giving back to its victims. Carmen is publicly perceived as a criminal by most law enforcement agencies – correction, make that a master criminal due to the sheer scale and theatricality of her heists. We will follow her escapades and get to determine not only where but WHO in the world is Carmen Sandiego?”

Hit PLAY on the video above for your first taste of the Carmen Sandiego theme song, then drop a comment with your thoughts below: Will you be following her journey on Netflix?