In addition to touting premiere dates for the final seasons of Jane the Virgin and iZombie (detailed here), The CW on Thursday also announced when The 100 will launch Season 6, plus other springtime scheduling moves.

The 100 will open Season 6 on Tuesday, April 30 at 9/8c, one week after the upcoming freshman drama Roswell, New Mexico wraps its run in the plum aprés-Flash time slot. 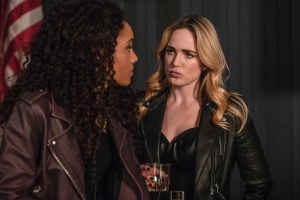 Legends of Tomorrow will return from its extended midseason hiatus on Monday, April 1, where it will now open the night at 8 pm. Arrow moves back an hour to 9 pm starting April 15, following a two-week break. (Black Lightning‘s Season 2 finale airs March 18.)

Lastly, the freshman drama In the Dark — which stars Perry Mattfeld (Shameless) as a hard-living, hard-drinking, disaffected blind woman whose life is turned upside down by her seeming discovery of a dead body — will premiere Thursday, April 4 at 9 pm, one week after Legacies concludes its freshman run.