Lainey Lewis, consider yourself Schooled on the ABC’s of being a good teacher.

Wednesday’s premiere of the ’90s-set Goldbergs spinoff stars AJ Michalka as Barry Goldberg’s ex-fiancée, who’s gone from college dropout/wannabe rock star to music teacher at her old high school William Penn Academy. (The career detour comes courtesy of credit card debt and broken dreams.) Of course, Lainey doesn’t have the experience or credentials to be an educator, but she does have Beverly Goldberg on her side. The smother basically pesters Principal Glascott (The Goldbergs‘ Tim Meadows) into giving Lainey the job. 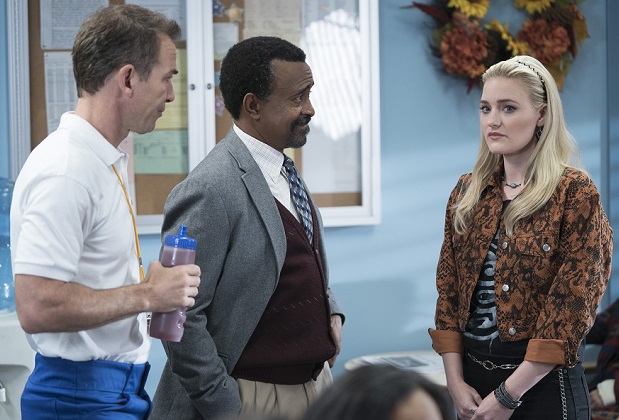 At first, the new faculty member is more concerned with getting paid — she asks if she can get her whole year’s salary in one lump sum — and still acts like a student, which might explain why Coach Mellor (The Goldbergs‘ Bryan Callen) can’t seem to grasp that she graduated a while ago. But being young and hip, Lainey can relate to her students, in particular Glascott’s troubled niece Felicia (Fred: The Show‘s Rachel Crow), who is a fellow child of divorce. The two get off to a rocky start when Felicia mouths back and Lainey blackmails her into performing in the school concert after she catches the girl with Zima. (Ah, the ’90s.) But after a heart-to-heart with Coach Mellor, Lainey is the one who learns a lesson about following her heart as a teacher and then truly bonds with Felicia. She even earns Glascott’s approval after he sees how much the students are enjoying the grunge-inspired concert.

Elsewhere, Coach Mellor benches his star basketball player Matty for not being a team player — darn that free-flying superstar Michael Jordan! — but eventually gets through to the young athlete. Matty, in turn, gets Mellor to accept change, like longer, looser basketball shorts. And after being impressed by Matty’s arm while playing HORSE, Mellor suggests the boy try out for football. (Matty is based on Falcons quarterback Matt Ryan, who went to William Penn Charter School in real life.)

As for what the Goldbergs clan is up to in the future, we don’t get a lot of hints. But a fun throwaway gag reveals that classmate Johnny Atkins is now the school janitor, which feels right.

Note: Brett Dier (Jane the Virgin), who does not appear in the premiere, joins the series-regular cast in a future episode as the “enthusiastic super-teacher” Charlie Brown (aka CB).

What did you think of the Schooled premiere? Grade it via the poll below, then hit the comments to back up your pick!