NBC’s Manifest resumed its freshman run on Monday night with some Major drama, all surrounding the quest for a “holy grail”…?!

HOLY MOLY | Ben attended Vance’s memorial, though NSA Agent Powell made clear that he was not welcome, suspected as he is of having something to do with Vance’s death. On his way out, Ben was approached by Aaron, a journalist who podcasts about the 828 mystery and wants Ben to go on record as a guest. Ben balked, but was admittedly intrigued when Aaron shared that one hour before the Red Hook incident, someone known as “the Major” arrived at the site via Black Hawk helicopter.

Ben asked Autumn, the farmhouse “escapee,” about the Major, and she said she once overhead a speakerphone call in which the Major, a woman, said that “money was no problem” since the “holy grail” they sought was “priceless.” After giving Ben that lead, Autumn lobbed her burner phone into the ocean… only to be approached later on by an ominous man who handed her a new one before saying, “The Major would like a word….”

When Ben heard the podcast reference the “holy grail,” he asked Aaron where that term came from. Aaron explained that, per one of his sources, a senator was overheard saying, “It’s the holy grail — we have to be the first or 828 blows up in our face”.

Ben finagled a meet-up with Agent Powell and lays all his cards on the table, inviting the NSA agent to look into the Black Hawk that visited Red Hook. Coaxed to do what he can to solve Vance’s death, Powell later reported back that said Black Hawk is a VIP transpo, its passenger’s name classified — and that it is currently heading from Langley to New York! Later, Powell was heading home when he got grabbed by some suited goons and thrown into an Escalade.

Ben went on Aaron’s podcast to talk openly about everything, the Major and “holy grail” included — but then made clear that this episode could not be released, that it instead was his “insurance policy” in case anything happened to him.

COLD COMFORT | Seeing Ben frustrated by his Carrie Mathison-style string board and having gone 10 days without a new calling, Michaela wondered if perhaps the Red Hook lab explosion “reset” things back to normal. But when Michaela checked on the almost-catatonic passengers they rescued from the warehouse — now taking in quite a view at a sleek, waterfront home — her contact with one, Paul, caused him to jolt “awake,” though with amnesia. Mick simultaneously experienced a new calling, a voice saying, “Find her” amidst a blizzard.

Thinking that the “her” she must find is Paul’s wife Helen, who never showed up at the hangar after 828 landed, Michaela with Jared’s help tracked down the woman, but learned that she has been in hiding because Paul used to beat her. Returning to the really spectacular waterfront facility, Mick railed at Paul for the man he used to be — until she was waylaid by the same calling again, this time glimpsing a hand and knee landing in the snow. Michaela realized that this extra-strong calling isn’t meant for her, that the voice isn’t hers — just as Saanvi arrived to suggest that the “holy grail” which Ben learned about is not a what but a who, since Red Hook was testing to see which passengers were especially sensitive to callings. We then saw Cal, asleep in bed at home, wake to experience similar imagery as Mick, of a person (with grimy hands) walking through a blizzard while clutching a photo of Michaela. And as Cal had this calling, his hand turned blue with frostbite. 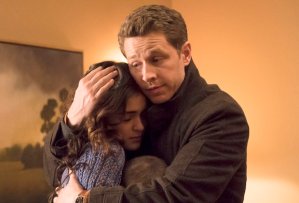 ELSEWHERE…. | At a gathering of the passengers who were drawn to the hangar, the pilot shared with Ben his suspicions about Fiona, and that “things can fall into the wrong hands”…. Anxious about her mom falling into familiar despair, Oliver invited Danny to come visit — while Cal happened to do same with Ben. The two men under one roof nearly came to blows, until Grace explained that she was tired of being made to feel guilty. Ben said that he now understood, and left…. Lourdes was ovulating (wink-wink), but Jared asked for “a beat” to regain his bearings and return to work after his near-death experience. After a day of tracking Paul’s wife, all while sensing a new distance from Michaela, Jared asked what the deal was. She said she refused to be the “wrecking ball” who blows up his newfound happiness, so she was going to ask that they not be partnered anymore. But later, Jared insisted that Mick is his soul mate, not a wrecking ball, and the reason he didn’t meet her at the hangar when 828 landed was because he knew he’d never go home. “We didn’t cheat death to live half a life,” he said, as the couple fell into each other’s arms, and then into bed.

What did you think of Manifest‘s winter premiere aka Episode 10 of 16?