When Fear the Walking Dead returns for Season 5, Lennie James’ Morgan will be seeing a familiar face. A seriously scarred face and not one that he’ll necessarily be eager to see, but nonetheless a familiar one: Austin Amelio, who played Negan’s long-suffering henchman Dwight on The Walking Dead from Seasons 6-8, is crossing over his reformed Savior to the AMC drama’s spinoff, Entertainment Weekly reports. 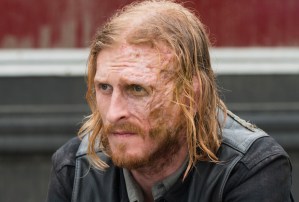 In his last appearance on The Walking Dead, in the Season 8 finale, Denise’s killer was spared by nemesis Daryl since he had not only saved Tara’s life but betrayed his bat-wielding boss in hopes of helping Rick & Co. put an end to his reign of terror. So the neophyte do-gooder ought to fit right in on Fear the Walking Dead, which ended its fourth season with fellow Walking Dead transplant Morgan forming a kind of Good Samaritans posse with the ragtag band of new friends that he had picked up since leaving behind his bloody past in Alexandria.

So, what do you think? Are you excited that there’s going to be another Walking Dead/Fear TWD crossover? Or, since it’s Dwight, are you like, “Eh, whatever”? Or are you over the crossovers altogether? Hit the comments.