With every real-life school shooting, news coverage shares but a glimpse at how SWAT teams get involved in handling, and hopefully suppressing, the situation. Now one-and-a-half seasons into its run, CBS’ S.W.A.T. will offer a closer look at all that is involved, and how it can deeply affect first responders.

In the episode “School” (airing Thursday at 10/9c), the SWAT team is faced with reminders of a past school shooting when they learn that a copycat plans to re-enact that crime. As the team races to stop the new threat, they flash back to that tense showdown from 2013, where we witness difficult decisions made — shots taken, and those not. As past and present crises collide, it adds up to an emotionally charged hour for the sophomore drama.

“Our writer and director and the actors did a fabulous job,” showrunner Shawn Ryan told TVLine going into the Q&A below. “I’m very proud of this one.” 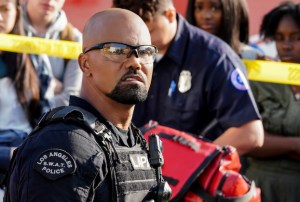 TVLINE | Did any event in particular precipitate this episode?
We had finished writing Season 1, and we were getting an early start on Season 2 ideas when in pretty short order there was the Sutherland Springs church shooting in Texas and then the Parkland shooting. And as you see these helicopter shots of SWAT team members going in and going out, I started thinking, “How honest are we being as a show if we dont take a look at this issue at some point?”

Now, it’s a very complicated, thorny issue, and you’ve got people with different opinions on what to do about it, and [sorting through that] wasn’t necessarily our goal. But there’s always something antiseptic about what we actually see of these things. We’re always seeing the students running out of the school, but we’re never really privy to what goes on inside. It’s easy to read the names but not really know the people. I said to the [writers] room, if we couldn’t find the right way to do it, we wouldn’t do it, but I wanted them to think about an episode in this arena.

The guy who wrote the episode, Robbie [Wittstadt], is actually a writers assistant. He did a freelance episode for us last year, and I promised him he could do another episode in Season 2, and pretty early on he came to me and asked for the chance to take this on. He has a friend who’s in the Secret Service, and he had done a lot of research already, which he presented me with…. He was clearly passionate about it, and I said, “OK, we’re still going to have a hill to climb with studio and network in the story arena, but why dont you start working on it.” And they started to come up with the concept you see which is two different school shootings, one in the past and one in the present. 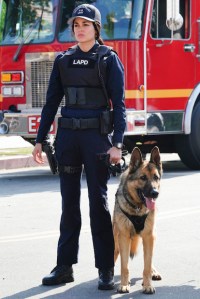 TVLINE | What sort of concerns did you suspect the network and studio might have?
I knew that it’s a political third rail issue, without a doubt — and when you’re doing broadcast TV, your whole reason for being is to appeal to everyone, not to one political side or the other. There’s just the question of how [entertaining] is it going to be to watch an hour of television in this arena. I anticipated that we would get to make the episode, but I knew that there would be “higher bars than usual,” let me put it that way.

TVLINE | But what you wound up with is rather apolitical. I didn’t feel like any agenda was being pushed, and as I watched the episode I realized that we never even really see the shooters’ faces.
A lot of that was intentional, based on Robbie’s conversations with people. A lot of the media — unintentionally, I guess, but maybe recklessly — give the shooters way too much attention, and their crimes are even publicized in a way. And one of the things we tried to do… the present-day shooter, we really only know his name; we don’t ever see his face. We don’t really know the reasons he concocted for why he wanted to do this shooting, and it’s not even really important to us. And the one shooter we meet in prison, as many are from our research, is completely regretful that he engaged in that behavior. We wanted to make sure that there was nothing that encourages someone to this behavior.

SWAT officers, they’re not political. Their job is not to pass legislation or craft public policy. Their job is to respond to these situations. What we wanted to do was show the horror of these events, to get people to say, “Well, we do have to change.” It’s up to others to come to a consensus about what that change may be, in terms of gun control, psychiatric care…. The purpose of the episode was to show the horror, and the effect it has on the first responders.

TVLINE | In real life, what is SWAT’s role in a school shooting situation versus how you present it in this episode? Did you have to take any liberties?
The one liberty that we oftentimes take on this show is that our SWAT team tends to arrive first on the scene, whereas often it’s patrol officers initially. Just for the sake of dramatization, our SWAT officers are able to traverse the city faster than possible, which is a cheat that I will acknowledge. But in terms of the actions within that [school shooting] environment, it’s very accurate. We have an LAPD active SWAT officer who advises us on the scripts, and we have a recently retired San Diego SWAT officer who works on-set, to make sure that everything is fairly kosher.

TVLINE | The flashback element affords you some specific and powerful character moments. You found interesting beats for everybody.
That was important. Each of the flashbacks ties to a specific character that was present for the 2013 incident, and sees stuff through their eyes. I spent a lot of time talking with Billy Gierhart, who directed the episode and is our producer-director, about making sure that that connection would be clear, the distinction between the two time periods…. But going back to your original question, there’s something about having the school shooting in the past that makes it a bit easier to digest the present-day story. 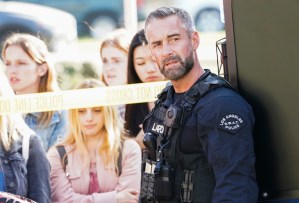 TVLINE | Lastly, talk about the PSA at the very end (featuring cast members Shemar Moore, Alex Russell, Jay Harrington and Lina Esco, plus Aaron Pisarzewicz, a lieutenant with the Los Angeles School Police Department’s School Safety Initiatives Division).
One thing I kept asking Robbie as he was writing this episode was, “What do we want people to take away from this episode?” I didn’t want to just have people feel bad or feel moved. I told him to talk to the Secret Service guy, talk to the L.A. School Police Department guy — what would they want to come out of this? When Robbie came back with what you wound up seeing in the PSA, I was like, “That’s great… but that’s not really in the episode, in a firm, easily digestible way.” So I started thinking, “Why not give it to the audience in a very digestible way?” — especially coming off the scene of Deacon and his daughter, where you’re seeing the emotion of all that and feeling protective of children everywhere. And let’s have the real L.A. School Police person be part of that.

It was different for us — breaking that fourth wall [with the PSA] isn’t something I’ve ever done before, I don’t think — but this felt like the time and the episode to do it, to just be very clear about the recommendations and the message that we’re trying to get across.