The good news about Season 3 of HBO’s True Detective: It has nowhere to go but up. After a universally acclaimed freshman season that reintroduced us to the pleasures of Matthew McConaughey, the crime anthology returned in 2015 with a universally panned sophomore season… and hasn’t been heard from since. Now, three and a half years later, it’s back — and having seen the first four episodes, I can say that Season 3 is marginally better than Season 2, at the very least. But despite a tremendous lead performance from Mahershala Ali, it doesn’t quite reach the heights of Season 1, either. More than anything, it feels unnecessary, hitting the same self-consciously grim notes we’ve seen plenty of times before. 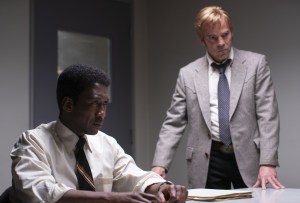 Season 3 — debuting Sunday, Jan. 13 at 9/8c with a two-hour premiere — skips around between three time periods to follow Arkansas detective Wayne Hays (Ali) and his methodical search for a pair of missing kids. In 1980, he and his partner Roland West (Stephen Dorff) investigate in the immediate aftermath of the kids’ disappearance, and then in 1990, the case comes back up again when the family of the man convicted of the crime tries to get the case overturned. Then in 2015, an aged Hays sits down to be interviewed about the case for a Making a Murderer-esque true-crime documentary.

After the disaster that was Season 2, creator Nic Pizzolatto understandably retreats back to his Season 1 roots here. But the somber tone, the hard-boiled dialogue, the bulletin board covered in tacked-up clues, the creepy ritualistic dolls, the raspy blues soundtrack… it’s like a game of Gritty Crime Drama Bingo. Season 1 felt fresh and innovative, but five years later, after Sharp Objects and The Night Of and a dozen other murder-mysteries have come and gone, it all feels a little too familiar. I found myself wishing Pizzolatto would mix things up a bit, either with the story or the format, instead of just mining the same old territory; after all, what’s the point of making an anthology if you’re just going to tell the same story over and over again? 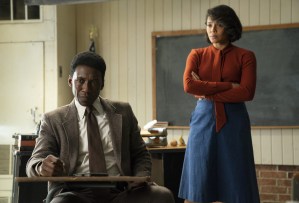 Season 3 is a fantastic showcase for Ali, though, who shines in a challenging role. Hays is a soft-spoken man who tends to keep things bottled up, but Ali’s intense stare lets us see all the emotions raging just below the surface. Plus, the Oscar winner is absolutely heartbreaking as the 2015 Hays: a stubbornly proud old man with encroaching dementia who can no longer trust what his mind is telling him. He’s backed up ably by Carmen Ejogo (Zero Hour), who co-stars as a local schoolteacher who catches Hays’ eye. She and Ali share a warm chemistry, and their characters’ complicated love story, unfolding over decades, actually ends up being more involving than the central case.

In fact, the cast is probably Season 3’s strong suit: Scoot McNairy (Halt and Catch Fire) is terrific as the missing kids’ angrily grieving dad, and Dorff’s roughneck work had me wondering where he’s been hiding for the past decade or so. The fourth episode has some sharp one-liners, thanks to a writing assist from Deadwood creator David Milch, and the opening credits are very cool, as always. But this season’s case and characters just aren’t immediately gripping, like they were in Season 1. In a way, it’s a victim of Season 1’s success: That season spawned dozens of imitators, and now when Pizzolatto goes through the same motions again, it almost plays like a rerun — and a mediocre one, at that.

Then again, nothing here is as ridiculous as Vince Vaughn’s Season 2 performance as a nonsense-spouting crime boss, either, so we should be thankful for that. It’s safe to say that Season 3 improves on that mess, but it still registers as a mild disappointment, all things considered. It’s almost worth watching just for Ali and the other actors… but just don’t expect to dig up anything new.