Lifetime kicked off its final season of Project Runway All Stars on Wednesday, pitting six previous American winners against six winners of various international franchises. (You know, we always had a feeling that World War III would be fought with needles and threads.)

After meeting on Governors Island, the all stars received their first challenge: to design a high-fashion look inspired by their countries of origin. With a budget of $200 and only one day to complete their ensembles, the pressure was immediate. 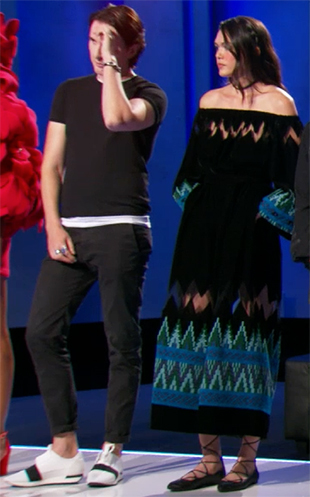 Dmitry’s “romantic, cool” tribute to his home country of Belarus earned him the season’s first win. Georgina Chapman “adored” the cutouts and praised his “modern take on bohemia.” Added Isaac Mizrahi, “It’s kind of a dress that you could find in a shop — but in velvet, in that length, it’s fabulous.” Guest judge Debra Messing also enjoyed the outfit, even if she thought it was cotton at first.

Choosing a loser, however, proved slightly more difficult. So difficult, in fact, that it didn’t happen. Much to the delight of the two contestants up for elimination — Anthony, who attributed his mental absence to the recent loss of his grandmother, and Anya, who simply played it too safe with her flowy tribute to Trinidad and Tobago — Milano announced at the end of the episode that no one would be going home this week.

Your thoughts on the final Project Runway All Stars premiere? Cast your vote for your designer of choice below, then drop a comment with your full review of Wednesday’s episode.