PREMISE | Wyatt Russell stars in AMC’s goofy mystical dramedy as Dud, a laid-back surfer dude who’s kind of aimless after getting dealt a series of setbacks by the universe. (He can’t even surf anymore, after getting bitten on the ankle by a snake in the Nicaraguan jungle.) But his life changes when he stumbles upon a local chapter of a fraternal lodge that’s hit some hard times of its own. Dud finds a brotherhood in his fellow lodge members… and also starts to unravel the wild mysteries that lie inside the lodge’s secret passages.

WORTH YOUR TIME IF YOU ENJOY… | Low-key stoner comedies like The Big Lebowski; surreal mysteries; the casual rhythms of beach life; satirical pokes at our money-hungry society; Bruce Campbell; shows where people hang out and not a whole lot happens. 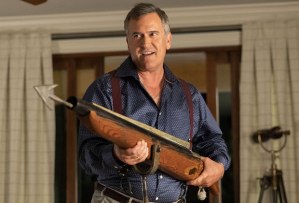 YOU SHOULD PROBABLY ALSO KNOW… | Lodge 49 is the very definition of “low-stakes,” and that makes it a refreshing change of pace from all the intense dramas Peak TV is throwing at us these days. Russell is thoroughly charming as Dud, delivering one of 2018’s most appealing TV performances, and the rest of the cast is pretty great, too, led by Sonya Cassidy (Humans) as Dud’s sarcastic sister Liz, Brett Jennings (Political Animals) as his lodge pal Ernie, and the great Bruce Campbell as the legendary land developer known as The Captain. At one point, The Captain even wields an antique spear gun. You’re sold, right?

WHERE CAN I WATCH IT? | All 10 Season 1 episodes are available to stream on AMC.com and through the AMC app.