As the Timeless series finale neared its end and the Time Team scored its biggest win yet, captured nemesis Emma dangled one last tease before Lucy: the prospect of getting back the sister who vanished from the timeline at the close of the Season 1 premiere. 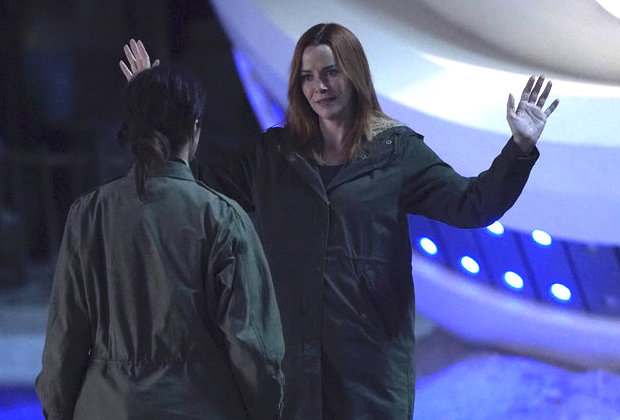 “Try me,” Emma (Annie Wersching) countered. “I only [removed Amy from existence] because your mother ordered me to. But I can undo it. It means nothing to me and everything to you….”

“And you want your sister back. I can make that happen. You just have to trust me.”

After due consideration, Lucy responded, “I don’t” — and in doing so, she passed up any chance to have her sister back in her life.

But what if Lucy had taken Emma up on her offer? Did the Rittenhouse agent indeed have a plan to “undo” what she done in the past?

To recap: The events of the series pilot/the Hindenburg not crashing kept Carolyn (played by Susanna Thompson) from meeting Amy’s father, Henry Wallace — aka the man who had led her to start smoking and eventually develop lung cancer. In the Season 2 premiere, Emma taunted Lucy with the fact that she had since taken multiple trips into the past to ensure that Amy could never be brought back.)

“I think Emma would have had an idea [to get Amy back], because she did do something to sort of screw up [that possibility] at the beginning of Season 2,” co-showrunner Shawn Ryan tells TVLine. “But I also think it was entirely possible that she was lying out of her ass [Laughs], just to gain an advantage. Ultimately, like Lucy said, Lucy couldn’t trust her.”

In the grander scheme of things, though, what did Emma do to ensure Amy’s (played in two episodes by Bailey Noble) continued absence from the timeline?

Ryan says the writers never nailed down a specific backstory behind that emotional whammy, if only because they had yet to foresee an episode where it would need to be addressed.

“We had some notions of when Emma might have gone back and done something to make it difficult [to reset]”, the EP says. “But we had never completely decided, because we didn’t know if there would need to be an episode where we’d address it…. We hadn’t committed to anything definitive in our minds.”

Note: The above story has been updated with greater detail on Emma’s past actions, and thus expanded quotes from Ryan.