The Orville is ready to boldly go where… Fox’s space dramedy dared not go before.

The Seth MacFarlane-produced and -starring series returns this Sunday at 8/7c (leading out an NFL on Fox double-header), before touching down in its usual Thursdays-at-9 home on Jan. 3.

Penny Johnson Jerald, who plays ship medic Dr. Claire Finn, spoke with TVLine about how Season 2 has kicked things up a notch (or 10).

TVLINE | Tell me about Season 2. What’s the same, what’s different, what are we leaning into…?
Season 2, I think, is going to be truly terrific. I’ve been telling people that we’ve just upped it up a notch, and actually that’s a blatant lie. I think we’ve upped it up at least 10 notches.

TVLINE | Really?
Yes. Yes. I’m not one to put it out there so fast, but in reading the scripts and then hearing the feedback from what’s happening in post [production], people are having immediate reactions to what we did, so I’m so excited for the fans to see it. And what’s different about it, now that we “notched it up” there, is that I think we go really deep this year. I think that the fans, because they are so open and very smart people, have allowed us to explore places that we thought could be borderline. They’re ready for limitless journeys.

TVLINE | You talk about taking it up 10 notches, and all I can think of is you had sex with a mound of Jell-O last season.
Well, you know what? It’s up 10 notches!

TVLINE | I understand that in the first episode of the season, Claire will have her hands full with parenting issues.
I do. My kids are back, and I’m so excited about that because every time I come on set, they’re there and I become this mother hen. I protect them behind the scenes, and then when we’re [on-camera], I feel like they’re my kids. And then I have to be reminded I have to give them back to their parents, because their parents are always there. We are dealing with issues that kids will still be dealing with in the future, and I’m excited about that too. There are things that we let them get away with, and some things we still just don’t let them get away with.

TVLINE | I find it interesting that she turns to Isaac for advice, because last time around his suggestions were a little… unorthodox.
But you know what? In some ways it did work to whip the kids into shape. I thought that was very interesting, because oftentimes as a parent you want to bounce things off other people, and I always stayed away from people who just didn’t have kids because I thought, “What the heck do you know?” But I have to tell you, sometimes when you’re looking through a lens from afar, you can see the direction that you might want to take without being fully invested. 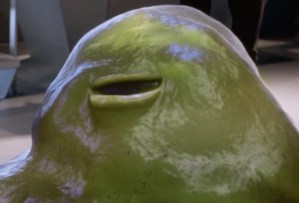 TVLINE | Where do things stand with Yaphit? The two of you got pretty serious last season. Or did he get too expensive to create with CGI?
[Laughs] You know what? Maybe Claire’s too much human for him. Maybe that scientific, that medical part of her knows a bit too much and she decided, “It’s probably safer this way.” You know, I just learned recently what Yaphit means. I had a Lyft driver whose name was Yaphit, and I thought, “This is crazy, getting in the car with someone whose name is Yaphit,” and it means “the beauty within.” I said, OK, let me look at that in terms of our Yaphit. And you know, there’s beauty in all of us, so I think Claire was able to find that inner beauty even though she lost her freaking head. But having that relationship certainly put him on the map, and it allows me as an actor to just go places where no one has ever asked me to go before.

TVLINE | Well, I blushed. I hear that at the end of January, there will be some a development in Claire’s love life…?
You didn’t hear that from me.

TVLINE | I’ve heard it from people who… can tell me things.
Oh, OK. Well, I’ll put it this way, there’s certainly more sex in season 2, I have to tell you. Can I leave you with that? 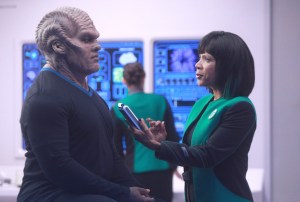 TVLINE | You all are putting the “O” in Orville. Got it. Tell me about the consult that Bortus needs from Claire in the first Thursday episode. I’ve seen vague teasers about some sort of “addiction” that he gets involved in, and my mind has been trying to imagine what’s going on. What can you say about it?
Well, because we’re friends, I’m going to tell you absolutely nothing. [Laughs] But one thing about Claire is she’s not just the medical doctor, the physical doctor, she is the psych doctor. So yeah, there will be some characters, and not just Bortus, coming to the couch to talk to her. And when you have someone from an all-male species who is with a partner, I mean, these are issues that come up. We deal with those, and I’m going to leave you at that!

TVLINE | Do you have a favorite episode from Season 2?
Oh, my God, absolutely. One thing we attempted in Season 1 is you really got to understand the different characters because they had, like, a breakout episode. But in Season 2, Seth has found a rhythm for the fans to be able to really get to know these characters. We all have, again, our highlighted episodes, but I think within each episode this season, you’re going to have a deeper journey with these characters because you know them and maybe you care about them… or you don’t care about them. But either way it’s on your side for great viewing, because you understand how they think. And because we go deep this season, we’re not afraid to touch places that some people will just be closed-mouthed about. I also think we do a really good job this year in making sure you understand that the ship offers a whole lot more than perhaps what we showed you last year, and then we do venture out to other planets as well.

TVLINE | Lastly, if only because I’m a big nerd, I need to ask if there are any cool new gizmos or gadgets to watch for.
You know, I brag about this all the time — I really do think that Claire has the coolest gadgets. Every time when I show up in props, it’s like the drug dealer in the corner. They’ve got this little thing and they’re like, “Hey, shh, come here, let me show you something….” And every time that happens, I know I’m going to get something fabulous to play with. The only downside about that is that I have to always make sure I know what the purpose of that instrument is and how to use it.

TVLINE | So that if it’s for one end of the body you’re not accidentally pointing it at the other end.
Yes, absolutely — but I don’t think I’m the only one that’s going to end up with some new gadgets this year. No, I have to tell you to look out for the special effects this year. There are eight of us who are series regulars, but I have to say that special effects really is our “ninth” regular person.

TVLINE | Well, there was that Season 1 episode where everything went flat, and it blew my mind. Like, how did they do that?
Let me tell you, they’re geniuses in special effects. Last year you know they were on the set intermittently, but this year they never left the set. So that will give you an idea of how exciting special effects are going to be this year.