PREMISE | This semi-autobiographical series — created by, starring and executive-produced by Savage — follows Andrea Warren, a working comedian living in Los Angeles with her husband Mike (Southland’s Tom Everett Scott) and their preschool-aged daughter Amelia (Olive Petrucci). Andrea is outwardly confident and tends to stick her foot in her mouth. Her verbal diarrhea, coupled with her general neuroses, lands her in uncomfortable social situations.

Despite its setting, this is not a showbiz comedy, in any shape or form. The show sets itself apart from similar L.A.-based series by focusing on Andrea’s relationships, rather than her work life. Those include her marriage to Mike, her writing partnership with longtime pal Kyle (Brooklyn Nine-Nine/Good Place frequenter Jason Mantzoukas), and her friendship with candid mother Sharon (The Ranch’s Kathy Baker).

WORTH YOUR TIME IF YOU ENJOY… | Savage’s previous work, which includes recurring roles on HBO’s Veep (as President Laura Montez) and Showtime’s Episodes (as network executive Helen Basch); cringe comedies in the vein of Curb Your Enthusiasm; dysfunctional, R-rated family antics; shows with a strong female voice. 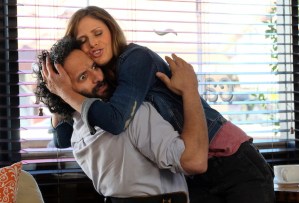 YOU SHOULD PROBABLY ALSO KNOW… | I’m Sorry doesn’t necessarily need to be watched in order, though there are a couple of through-lines in Season 1. Those include Andrea’s growing disillusionment with her father Martin (The Cool Kids‘ Martin Mull), who’s going through something of a third-quarter-life crisis, and the process of getting Amelia into kindergarten. There’s also an amusing running gag involving Andrea’s next-door neighbor (played by Togetherness‘ Steve Zissis).

Unlike most comedies, I’m Sorry finds its voice almost immediately. In fact, the second episode — in which Andrea and Mike contend with Amelia’s newfound prejudice — is among the funniest of the season, and may very well be a better jumping-on point than the pilot. And if you’re not already convinced that you should give the show a shot, just take a gander at the following list of Season 1 guest stars — including, but not limited to: Judith Light, Lizzy Caplan, Judy Greer, Allison Tolman, Nelson Franklin, John Ross Bowie and June Squibb.

WHERE CAN I WATCH IT? | Season 1 is available to stream on Netflix and truTV.com.

Will you catching up on truTV’s I’m Sorry? Perhaps you already have? Drop a comment and let us know!