Whew, talk about a Staff meeting.

In Episode 2 of Marvel’s Runaways‘ second season (now playing on Hulu), Nico (played by Lyrica Okano) fell into quite a parent trap when she showed up at her family home to reclaim the Staff of One. What followed was a startlingly intense throwdown between mother and daughter — one that threatened to claim some collateral damage  along the way, in Nico’s friends.

TVLine spoke with Okano about slugging it out with TV mom Brittany Ishibashi, how the fallout of the fracas affects the nascent Nico/Karolina romance, and “darker” times still yet to come.

TVLINE | For starters, I wanted to get your reaction to Episode 2 and the fight on the lawn between Nico and her mom. What was your first reaction when you realized how intense it was going to be?
Quinton [Peeples], the co-executive producer of our show, is very, very giving with the facts and our character’s storylines. And when we first got the script for Episode 2 and we got to that fight scene, Quinton had a little talk with me and was like, “This is just a short preview of what we are to expect from Nico and the Minorus throughout the season. There’s going to be a lot of fighting for you guys.” That was really exciting for me to hear because I was aware that James Yaegashi, who plays Robert, and Brittany Ishibashi, who plays Tina, are both black belts in martial arts, and I am as well. When we heard that news, we were really excited and really motivated to get some training done. 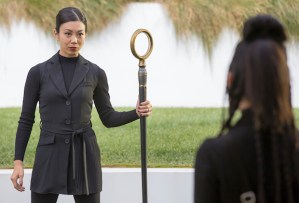 TVLINE | I was surprised by how y’all were just going for it. Like, Mom was whaling on you.
I know! I was talking to Brittany about this, like, “Wow, I guess Nico’s upbringing must’ve been a lot harder than we all thought in the beginning.” Tina and Robert must have put Amy and Nico in martial arts training from when they were young, to learn discipline and hard work. That was the Minoru way, so yeah, it made sense.

TVLINE | What do you think is driving Nico in that scene, to be as aggressive as she is being?
I mean, she needs to get her Staff of One back — that’s definitely her first goal. And then her second goal is to obviously face her parents. Going into it, Nico’s obviously a bit naïve about how everything might go down, and as you see from what happens, she learns very fast that everybody needs to learn how to train together and build their powers together. There’s a lot more that needs to be done before they can go forward and try to fight their parents.

TVLINE | Do you personally feel like Tina crossed some lines in that fight?
Yeah. Of course, I think everyone already knows this about Tina, but she has no mercy in her bones — and Nico has never expected any from her, so I don’t think she’s very surprised.

TVLINE | I mean, when she froze the pool over Molly, I was like, “Whoa.”
Yeah. Where was Tina going to take that to…? Obviously, she wasn’t really that sorry about hurting Molly, and it kills Nico to know that because of her last decision, she could’ve possibly gotten Molly killed and Karolina really badly hurt. That’s all going to be on Nico, and so I think from that fight scene she learns that she needs to think before she does, and she needs to look out for everybody else. I think that’s where her “reluctant leader role” headspace starts to happen. I think that’s when she realizes that there’s a lot of thinking that she needs to do. 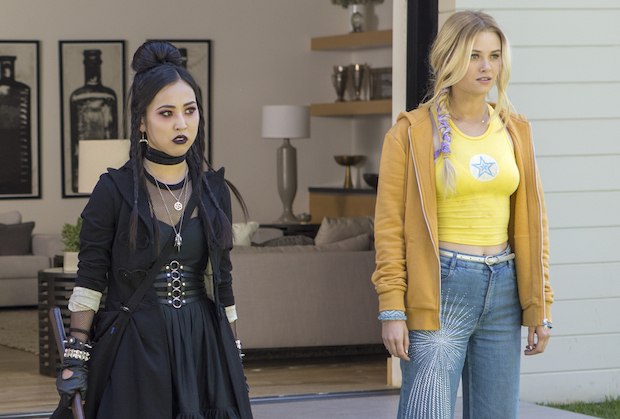 TVLINE | Tease a bit how the events of this fight throw a wrench in the works for Nico and Karolina.
Oh man. Yeah, I remember shooting that scene with Ginny [Gardner] and I was just kind of like, “Oh my God, what’s going to happen with ‘Deanoru,'” because we’ve been such big fans of their relationship. It’s not going to be easy. Nico at that point she felt so defeated and she realized that Molly’s life was on the line, so I think in that scene afterward when she’s talking to Karolina about how they need to be stronger, she doesn’t know how to process all those emotions. She obviously blames Karolina for not thinking and for not doing everything that she could, and then after that she realizes that, no, this is a much bigger problem. We as a group are too weak and we have parents that are coming after us with all these powers — what are we going to do?

TVLINE | What do you think this new relationship represents for Nico? Because from where I sit, I feel like she’s mayyyybe five percent more tentative about it than Karolina is.
Oh yes. I feel like after her sister passed, all Nico has known was darkness. She was alone, she was isolated, she didn’t have anybody to lean on, and when she reconnected with Karolina, she finally saw the light again. That is what Karolina is to Nico — she’s the light of Nico’s life, and as well as for Karolina, Nico guides her through the darkness. I think that’s why they make such a powerful dynamic. To Nico, Karolina is her only light now, especially with everything that’s been happening, so she really wants to make things work with her.

TVLINE | Looking a little further down the road, there still is the matter of the truth about Amy’s death eventually coming out. Give us a hint of how Nico might react to that. I myself totally forgot that truth was still out there.
I know; I had to keep reminding myself that Nico still doesn’t really know the whole truth about Amy’s death until it is revealed by [Spoiler] — and hearing it from [Spoiler] is probably the worst scenario that could’ve happened for Nico. Of course in that moment, it took so much for [Spoiler] to tell her truth, and Nico obviously appreciates honesty, but it’s tough. It’s not easy to accept that your girlfriend’s father killed your sister and made it seem like a suicide, which she believed for so long. Yeah, that’s a lot to take in for Nico, and it awakens another kind of darkness in her that you’ll see later on in the season.