Two father figures proves to be a crowd, as seen in these photos from the first 2019 episode of Manifest.

When last we tuned into NBC’s freshman hit, Ben Stone (played by Josh Dallas) had succeeded in his and Michaela’s mission to track down the abducted Flight 828 passengers and thus sever young Cal’s agonizing connection to one who was being subject to electro-shock experiments. But because in doing so, Cal was drawn to the location of much gunplay and an eventual explosion, Ben was “thanked” by getting thrown out of his home by wife Grace (Athena Karkanis), who also insisted in keeping their son under her roof.

When Season 1 resumes on Monday, Jan. 7 at 10/9c, Olive (Luna Blaise) worries that because of the separation, her mom will retreat into the broken woman she was after Flight 828 disappeared, so she turns to Danny (Daniel Sunjata) for help. As shown in the photos above and below, that plan backfires and leads to a heated confrontation between her father and the father figure who entered Olive’s life after 828’s vanishing.

Elsewhere in the midseason premiere, titled “Crosswinds”: Michaela (Melissa Roxburgh) experiences a mystifying, next-level calling that launches her on a mission that brings her relationship with Jared (J.R. Ramirez) to a head. Ben in turn explores an alternate meaning to Michaela’s calling that leads him to a new alliance… and a powerful new adversary. 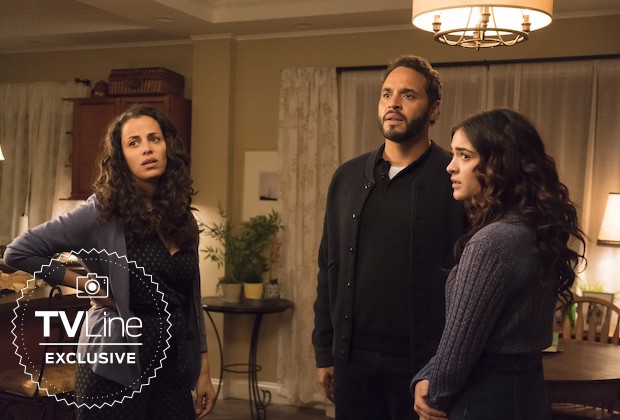