The Timeless Team embarked on one final mission — followed by another final, final mission — as the time-travel drama wrapped its two-season run on NBC this Thursday night.

Spurred on by the most unexpected arrival of dystopian, circa-2023 Lucy and Wyatt, the Time Team aimed to get Rufus back into the timeline, alive and well, though our Wyatt deduced that to do so, his not-pregnant sorta-wife Jessica would need to be re-removed from the equation.

Before the Time Team could do much with the quickly departing Future Lucy’s marching orders, they had to chase the Mothership to 1848 California, where Emma and Jessica aimed to activate their final sleeper agent (while gathering gold nuggets along the way). Flynn went along, but after giving Lucy the Reader’s Digest version of their ill-fated future liaison — which was referenced in Future Lucy’s journal — he sneaked off in the Lifeboat-Plus to do what Wyatt feared need be done: kill Jessica on that fateful night, as he apparently always did.

Flynn suffered through the side effects of visiting a timeline in which he already exists long enough to do the deed, after which he sent the Lifeboat-Plus back to 1848, caught a peek at himself with his happy family, and then slipped away to eventually die.

Back in the Gold Rush, Lucy, Wyatt and Jiya were being held prisoner when who should save the day but Rufus, freshly restored to the timeline by Flynn’s heroics! Emma realized the “fix” had been made when she returned to the Rittenhouse base hollering for Jessica, only to learn no such henchwoman existed. Emma made tracks for 1950 North Korea, where she bribed a pilot to crash a helicopter carrying Lucy, Wyatt, Rufus and Jiya. Upon arriving in that wartime period, the Time Team did hitch a ride from the pilot, but survived the crash. Afterward, while waiting to commandeer a ride, they found themselves helping a young woman give birth. Lucy sought out a proper doctor, only to watch from afar as a bomb blew up the location where ersatz-midwife Wyatt had holed up with the pregnant lady. Wyatt, though, emerged from the blast perimeter with a baby girl in his arms.

After the mom and her family were delivered to safety via the Hungnam Evacuation (aka “The Miracle at Christmas”), the Time Team hid in a chapel, fearing the worst… until Agent Christopher arrived in the Mothership, with prisoner Emma acting as pilot! Emma then dangled a sweet deal before Lucy — the possible return of her sister, Amy. Lucy, though, didn’t believe Emma and made the difficult decision to let that part of her past stand pat. Emma was shot dead as Chinese forces arrived on the scene, while the Time Team piloted both time ships back to the present.

In a series of final sequences, we visited a 2023 that was not dystopian, where Lucy was a freshly tenured history professor and she and Wyatt were parents to twin girls named Flynn and Amy. Rufus and Jiya were also happily together, and had founded some sort of STEM/tech foundation smush-named RIYA. Agent Christopher was still with the government, as was Connor, and while the Mothership had been purposely destroyed, they held onto the Lifeboat-Plus just in case someone else (inevitably) invents time travel and history again needs saving. The original Time Team would use the ship one final, final time, to visit 2014 São Paolo, where Lucy needed to complete the loop by delivering her journal to a downtrodden Flynn, emotionally reassuring hm that while he would be painted as a terrorist and traitor and ally with a cause few believe in, his emerge as “maybe the greatest hero of us all.”

Then, in one last bonus scene, we saw that Paulina, a young girl who duly impressed Rufus at a 2023 science fair, was sketching ideas for a time machine…. 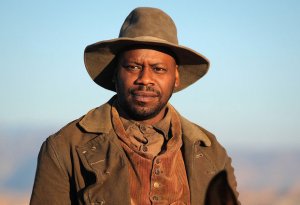 TVLINE | For starters, I have replayed that closing montage at least a half dozen times so far. The music is terrific. Goosebumps every time.
It’s fun, isn’t it? The beginning of that song, that “Time After Time” cover, sounds a little bit like the Stranger Things theme.

TVLINE | Outside of wanting the finale to be generally “satisfying” and all that, what specifically was on your “must do” checklist?
Well, we had to save Rufus.

TVLINE | Well, yeah.
Can you imagine if we made this and we didn’t save Rufus? [Laughs]  The backlash we would have endured?! 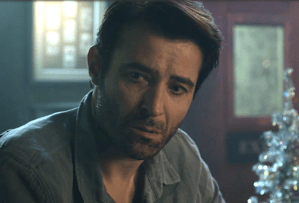 TVLINE | “Sorry, folks. Just couldn’t make it happen.”
I also think we had to deal Rittenhouse a real death blow…. We had to resolve the Lucy/Wyatt/Flynn romantic triangle of it all…. And I know that [co-creator] Eric Kripke, for months if not a year-and-a-half, has been adamant about how at some point we had to go back to São Paolo, Brazil, and see Lucy give Flynn the journal. That turned out to be this real emotional wallop in the finale, so credit to Eric for knowing that it was something that needed to be in there.

TVLINE | That scene sneaked up on me, but as it started, I was like, “Yep, this totally had to happen.” And the speech Lucy gave him made sense — it tracks that Flynn would go on to behave the way he did for two seasons.
Yeah, Eric was quite right about that. Also, because Jiya in the last couple episodes of Season 2 had lived this whole other life for three years, in the 1880s, we wanted to ask: How has that changed her? That was something that we wanted to get across. And then we wanted to find a couple of cool time periods and historical characters to deal with. That’s always been one of the not-so-secret pleasures of the show, showing the audience a time and a place that’s different from our own. 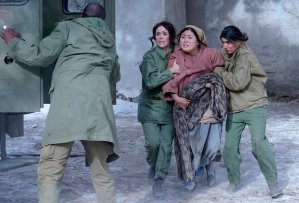 TVLINE | How did you arrive at 1950 North Korea?
As often happens in this business, you’re given some constraints — and it oftentimes leads to the best things creatively. When NBC picked up this [double-episode finale], the very strongly worded request from [network boss] Bob Greenblatt was, “We think were going to air this around Christmas, so we really want this to be Christmas-themed” We were like, “Oh, OK. Well, that takes out 363 of the 365 days a year.” It’s already hard enough to find a historical event, now we’ve got to find one around Christmas Eve or Christmas Day.

We spent three weeks, maybe, investigating. There was the idea, “What about Washington crossing the Delaware on Christmas Eve?,” and I was like, “We already had George Washington in Season 1, so it feels like that would be repetitive. We need something new and different.” And then Eric and Lauren [Greer], who wrote the episode, were like, “We think we’ve got something,” and they told me the story about the evacuation of Hungnam in 1950, during the Korean War — dubbed “The Miracle at Christmas.” I was like, “Well that’s a title, if they want this to be Christmas-themed!” The only issue was that there’s no one really of huge historical significance involved in it, and that’s when we discussed, “Wouldn’t it be beautiful if the important historical figure here isn’t a famous person but is Everywoman?” This pregnant woman that we came up with is a stand-in for everyone that isn’t written about in history books but is nonetheless important. 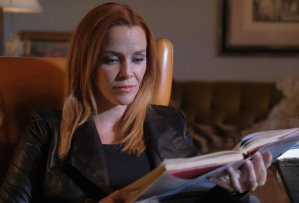 TVLINE | Am I right that Emma’s final acts were to 1) get gold nuggets from 1848 to then 2) make gold bars to pay off the pilot in Korea…?
She also used the time machine to pick up some art, including the Mona Lisa.

TVLINE | So Cahill was a bit right that she was phoning it in for Rittenhouse.
Yes, yes. But also by setting up the “Wanted” posters [in 1848], her plan in the first and second hour was to lure the Time Team to a place where they could be ambushed and taken out of the picture. But the gold was the main incentive for her. It was less about changing history and more about replenishing the coffers. 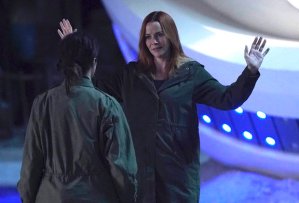 TVLINE | Talk about Lucy’s decision to not try to get back her sister.
There was a lot of conversation about that. I will take the credit or the blame for that one, because ultimately the more I thought about it, the more I felt that they would have to make the decision that using these time machines, even if you’re trying to do something good, ultimately is bad. That really, she’s going through a loss that is no different than the loss that almost every person goes through in their life, be it a sibling or a parent or a friend…. The speech that she gives to Wyatt in the Lifeboat, before they go back, is about how everyone finds a way through [loss], because that’s life, essentially. That is bookended afterwards when you go to five years later and they’ve named their twins Amy and Flynn — that is the circle of life, that is the progression…. To me, that decision makes them just so much more human.

Part of the fun of time travel shows in general, I have learned, is the idea that you can make mistakes and go back and change them is really intoxicating, and yet it isn’t a real option for us. The idea that she suffers the kind of loss that we all suffer and finds a way through it, she finds a way to happiness, she finds away to tenure and marriage and twins… was more life-affirming than going back and manipulating things. “I’ve lost my sister and I’m not getting her back.” And Flynn will look at his family through a window, but the reality is that he’s lost them. Tragedies happen and we can’t always change them. 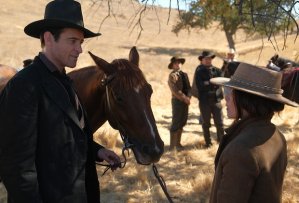 TVLINE | The brief, ill-fated affair with Lucy that Flynn spoke about — when would that have been?
In the timeline that results in Future Wyatt and Future Lucy coming back from the year 2023, I think it would have existed in that timeline probably in the 2019-2020 range, I would say.

TVLINE | Was there any scenario where you weren’t going to tease the possibility for more to come, with that Paulina scene at the end?
[Laughs] No. We’re sort of like Rufus, we’re a little cocky in the idea that death doesn’t “take” with us, so to me it was important to have. We wanted to give a very satisfying conclusion to the NBC portion of this show, and what may be the end of any version of this show. At the same time, we wanted that liiiiittle crack, so that if the time comes, the set-up is there for it.

TVLINE | Do you have in mind a precipitating event for the Season 3 premiere, if there ever should be one?
Not yet! It’s a little too early. I’d have to feel some momentum and get the sense that somebody might make it, and then I’d assemble whatever writers I could and talk it through. 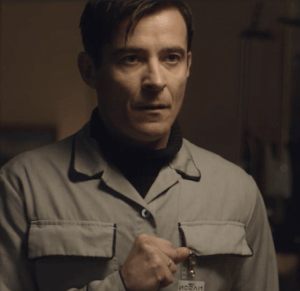 TVLINE | Lastly, do you have any favorite Easter eggs in the finale?
Well, my wife [The Shield‘s Cathy Cahlin Ryan] voices [Paulina’s] mom in the final scene. [Laughs] The other one that was sort of fun comes when the montage starts after the Sao Paolo scene. The very first thing we see is Flynn in his Mason Industries uniform, putting on his badge. That’s actually a scene we had shot when we made the pilot, back in March 2016, that we cut for time. We remembered that we had that and were like, “Wouldn’t it be cool if we see that, as he prepares…?” So if you look, he does look two years younger.