The Enemy Within, starring Dexter‘s Jennifer Carpenter, has been tapped to inherit Manifest‘s time slot once NBC’s mystery series has closed the gates on Season 1. Meanwhile, the This Is Us-like drama The Village is being paired with — you guessed it — This Is Us.

The Enemy Within will premiere Monday, Feb. 25 at 10/9c, after Manifest has wrapped its 16-episode fresh run. Described as a “fast-paced, spy-hunting thriller,” it stars Carpenter as Erica Shepherd, a brilliant former CIA operative now known as the most notorious traitor in American history. Currently serving life in a Supermax prison, she is enlisted by desperate FBI Agent Will Keaton (Rosewood’s Morris Chestnut) to help track down a fiercely dangerous and elusive criminal she knows all too well. The cast also includes Raza Jaffrey (Code Black), Kelli Garner (Pan Am), Cassandra Freeman (Luke Cage) and Noah Mills (The Brave). 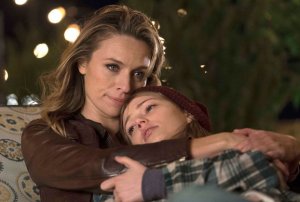 The Village will premiere Tuesday, March 12 at 10 pm, where it will lead out of This Is Us for three weeks before NBC’s acclaimed family drama wraps Season 3; at that point, The Village will move up to claim the 9 o’clock time slot.

The titular Village is an apartment building in Brooklyn “that appears like any other from the outside, but is quite unique inside. The people who reside here have built a bonded family of friends and neighbors.”

Among the series regulars, Michaela McManus (SEAL Team) plays Sarah, a nurse and single mom raising a creative teen; Daren Kagasoff (The Secret Life of the American Teenager) is Gabe, a young law student who got a much older and unexpected roommate; Warren Christie (Alphas) plays Nick, a veteran who’s returned from war; and Frankie Faison (The Wire) and Lorraine Toussaint (Saving Grace) represent “the heart and soul of the building” as Ron and Patricia. Moran Atias (Tyrant), Dominic Chianese (The Sopranos), Jerod Haynes and Grace Van Dien also star.