The fourth season of Netflix’s Fuller House ended with a sentence we never thought we’d hear: “Stephanie Tanner, you are now officially going to be a Gibbler.” Let’s rewind a bit and see how we arrived at this declaration:

In an effort to ease the escalating tensions between Stephanie and “Fat Feet” — sorry, Kimmy — in the final weeks of the pregnancy, D.J. gifted the She Wolf Pack with tickets to Hamilton. But before a single line of historical hip-hop was uttered, Kimmy’s water broke, forcing the ladies to abandon their front-row seats. (I would have tried to hold it in until at least the end of Act 1, so perhaps it’s for the best that I’ll never carry a child.)

Kimmy’s regular doctor wasn’t available — he was apparently also seeing Hamilton and moved up when he noticed the girls’ vacant seats — but she received a welcome replacement in the form of Leslie Grossman, with whom she immediately bonded over The Bachelor and breakfast toast. As one does. 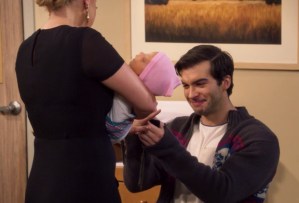 The actual labor process was relatively smooth, with Kimmy giving birth to the tune of Joni Mitchell’s “The Circle Game” while Jimmy and Fernando nervously binged on sandwiches in the hallway. And although the episode ended before Steph and Jimmy could think of a name for their newborn daughter, Season 4 still managed to squeeze in one more big moment: a proposal!

* Though Rocky forgave Jackson for making fun of her at the prom, she said she doesn’t trust him enough to get back together. (Yes, girl! You deserve better!) But after an awkward car ride to the hospital, and after falling under the spell of a new birth, Rocky was last seen holding Jackson’s hand, suggesting she’s had a change of heart. (No, girl! You deserve better!)

* Jimmy’s irresponsibility has been pointed out to him several times this season, but it wasn’t until a pep talk from Max — and the loss of a very delicious, very slippery sandwich — that he really felt ready for fatherhood. Now if only someone would sit him down and explain the truth about Santa Claus…

Your thoughts on Fuller House’s finale? The fourth season in general? Grade ’em both in our polls below, then drop a comment: What should Steph and Jimmy name their baby girl?