At the close of Counterpart‘s Season 2 premiere, FBI turned OI agent Naya Temple (played by Betty Gabriel) reported into the mysterious Management, via that old timey radio apparatus. This time, though, once she was done affirming her commitment to drawing out the agency mole, viewers got a glimpse at what’s going on at the other end of the signal.

In a fittingly cryptic scene, we saw an older man, code-named Avalon, complete a text exchange with other individuals, before shutting down his transmitter and storing it into a locked compartment.

Did we finally lay eyes on Management? 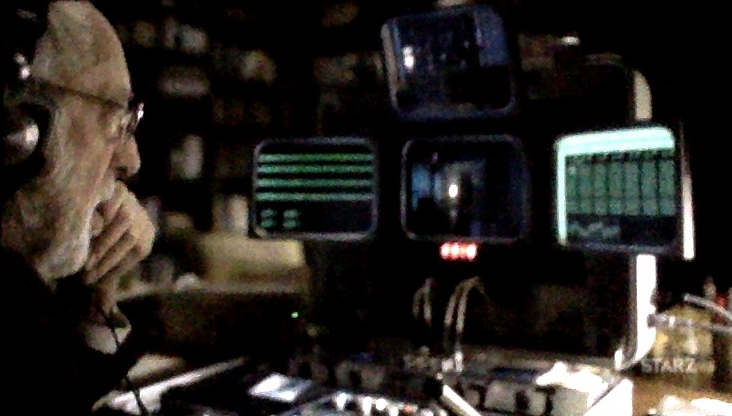 “I guess I can come down pretty clearly on that one,” answers series creator Justin Marks. “That’s the beginning of our exposure to Management. Who they are and why they act that way is something that this season is really about.”

As Season 2 of the acclaimed Starz drama continues, “we really do unfold Management in a real way — as well as some of the secret origins of the Office of Interchange in general,” Marks adds.

So from that tag scene, are we to glean that Management isn’t any one person? “It’s a little more complex than that,” Marks hedges. “In every episode, you’re going to get a little more of it.”

“Management as an idea is really a central tenet to Season 2, which is something I love,” adds executive producer Jordan Horowitz. “This idea of Management and building up the hierarchical structure of the two worlds, and what’s controlling them…. That’s a really big and a really great part of Season 2.”

Yet while the Season 2 opener gave us that tease, after catching us up on Howard Prime, Emily Alpha and the Quayles, one major player was conspicuously unaccounted for: our Howard, who was trapped on the other side by the events of the freshman finale, and was last seen being carted off to the prison known as Echo after impulsively killing the powerful Alexander Pope. But fear not, Howard’s story is picked up on this Sunday at 9/8c.

“We do a thing in these first two episodes, where we really wanted to reestablish geography,” Marks explains of Howard’s thus-far MIA status. “Rather than doing the crosscutting pattern that the rest of the series does, we wanted to go back to the roots of the first episode and tell the first episode entirely on our side. And the second episode entirely on the other side. And then starting in Episode 3, it’ll begin to crosscut a lot more.”

Horowitz says that maybe “a couple of weeks” will have passed since we last saw Howard, and he isn’t at Echo just yet. “He’s in a pre-Echo place, you’ll see, and then we start to introduce this idea of Echo,” an underground facility, the EP previews. “And that’s where we meet James Cromwell” as Yanek, the enigmatic warden of Echo, where Howard will fight for his life.

Want more scoop on Counterpart, or for any other show? Email InsideLine@tvline.com and your question may be answered via Matt’s Inside Line.