The following post contains major spoilers for the fall finale of All American.

Wednesday’s fall finale brought a number of simmering storylines to a boil, resulting in major life changes for Spencer — and everyone in his orbit, for that matter. Let’s recap what went down in the eventful hour:

THE GANG’S ALL HERE | Much of this week’s episode focuses on Shawn and Coop’s continued involvement with Crenshaw’s gangs, a situation that’s been getting increasingly sticky for the teens all season. One morning, while Shawn is making breakfast for his daughter, gang member Tyrone shows up at his door, and he gives Shawn and Coop a worrying ultimatum: They either ride with Tyrone from here on out, or they’re going to be in serious danger.

Coach Baker’s wife, Laura, finally gets to flex her legal skills in this episode, and she offers to get Coop and Shawn the protection they need — provided that Shawn cooperates with Laura’s team and rats out Tyrone to the D.A., who has been looking for intel on Tyrone for quite some time. Shawn is adamant that he’s not going to snitch on any gang member; if he’s going to get out of the gang life, he’ll find a way to do it himself.

Later, Shawn eventually does come up with an exit strategy. He meets with Tyrone the following day and hands over a backpack full of cash — all of the money that Shawn has been squirreling away from previous jobs and visits to Alvin’s barbershop. He’s ready to give himself and his daughter a fresh start down in Louisiana, and he’s hoping he can buy his way out of the gang life… and, much to Shawn’s surprise, Tyrone accepts the offer. After realizing just how much dough Shawn is willing to fork over, Tyrone dismisses Shawn from his duties — but, because he’s also a jerk, he informs Shawn that he “overpaid” for his ticket to Louisiana. “You ain’t worth that much, Shawn Scott,” Tyrone says before driving off.

But Shawn’s happy ending is ultimately too good to be true. Just as he’s arriving back at his apartment, giddily telling Coop over the phone how thrilled he is to be getting a fresh start, Shawn is shot in the chest by a rival gang member. He collapses as the shooter drives off, then dies on the sidewalk. (It’s a testament to All American‘s writers, and Shawn’s portrayer, Jay Reeves, that I was ultimately heartbroken to see Shawn’s story end this way.)

Coop is understandably wrecked over Shawn’s death; after all, she was on the phone with him when he died, and she heard the gunshots loud and clear over the line. Patience, on the other hand, is admittedly glad that Shawn’s death is getting Coop out of the gang world for good… until Coop informs her that that part of her life isn’t over just yet. 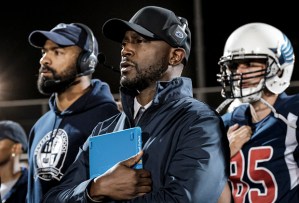 Coach Baker and Spencer have a desperate brainstorm during halftime, and they decide to enlist Spencer’s Crenshaw friend, Chris, for help coming up with new plays. With assistance from Chris (and that fancy new Windows tablet that the show was very clearly advertising!), Beverly High blindsides Malibu with their plays in the second half, and Beverly emerges victorious, clinching the division title. But after watching Asher exchange a nod with one of Malibu’s players, Jordan realizes that Asher is the one who gave Beverly’s playbook to Malibu, and he threatens to have Asher taken off the team completely for what he’s done. (Asher, meanwhile, is sent to live with his mom for the foreseeable future, because his dad no longer finds him useful now that he’s not playing football. Yikes.)

* Despite their pledge to only remain friends for the time being, Leila and Spencer give in to their mutual attraction and sleep together after the homecoming game. Leila tells Spencer that it’s cool if he wants to forget the whole thing happened and just go back to being acquaintances, but Spencer has the opposite idea. He’s tired of pushing down his feelings for Leila, and he’s ready to pursue a relationship with her. (Leila responds by kissing him and dropping the sheets she had wrapped around her body, so let’s assume they’re on the same page about all that.)

* After the football game, Malibu’s head coach — who we already know loves to make Coach Baker miserable — takes Spencer aside and reveals that he used to know Spencer’s father. Spencer is skeptical at first, informing the coach that his father abandoned him six years ago… but the coach knew Spencer’s father to be a very good guy, and he suspiciously tells Spencer that his dad wouldn’t have left if he didn’t have a good reason. “And Billy Baker?” the coach continues. “That man will do whatever it takes to get what he wants.”

* Speaking of Coach Baker, he finds himself in a bit of a pickle at the end of the episode. When Beverly High’s sports committee receives an anonymous tip that one of the football players has violated the drug policy, Coach Baker tells all of his players that they need to be drug-tested immediately. But there’s a problem: Jordan was the one who did drugs when he got high the previous night, and he regretfully tells his father that he’s going to fail the drug test if he takes it. Later, during a brief moment when no one is manning the table lined with urine samples, Coach Baker walks over to it and swaps out his son’s sample for his own.

Your turn! What did you think of All American‘s fall finale? Did you see Shawn’s death coming? Grade the episode in our poll below, then drop a comment with your full review.