Technically, The Voice’s Top 8 Results Show didn’t have a theme. But, unstated though it might have been, we all knew what it was: Thank you, next. Four singers were sent packing ahead of Monday’s Season 15 Finals, and going into Tuesday’s episode, at least based on TVLine’s poll, it seemed likely to be (sniffle) my beloved Sarah Grace, who’d already dodged more bullets than Wonder Woman; Chris Kroeze, who’s a fine singer but let’s face it, not exactly an electric presence on stage; Kymberli Joye, whose Tori Kelly cover hadn’t impressed you as much as it had me; and the embattled Reagan Strange, who’d performed better than usual, though still nowhere close to the same league as the show’s other kiddies, Kennedy Holmes and Chevel Shepherd. 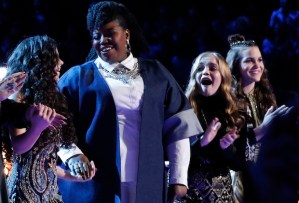 Of course, before we learned which contestants were safe and which were sorry, there was a lot of filler, all of it way more entertaining than Carson Daly’s inane questions for the contestants. First, Michael Bublé hit the stage to perform “Where or When,” a Love song so — so! — lush and beautifully orchestrated, I felt like it left my ears velvet-lined; then Carson threw to a pretty hilarious outtakes reel (complete with Chevel falling out of a hammock); Hailee Steinfeld sang the middling “Back to Life” surrounded by interpretive dancers in Bumblebee yellow; and JHud raised the roof with “I’ll Fight” from the RBG documentary while rocking an altogether apropos “Nevertheless, She Persisted” T-shirt.

Advanced to the Finals (in Chronological Order)
Kirk Jay (Team Blake)
Chevel Shepherd (Team Kelly)
Chris Kroeze (Team Blake) — what?!? Not Kennedy Holmes?!? Oh no, no, no, this just ain’t right. This is the opposite of right. Nothing against Chris, Kirk or Chevel, but… WTF?!? Kennedy could sing and has sung all of them under the table. #distraught 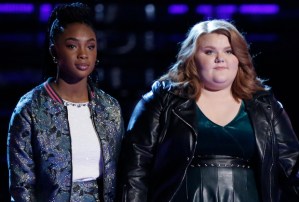 MaKenzie Thomas (Team Jennifer), “Up to the Mountain” — Grade: A- | From the get-go, MaKenzie sounded in her element on this number — not like she was trying or struggling, more like she was singing to an old friend. It was a simple, spare arrangement that showed off her chops better than maybe any song I’d ever heard her do. And that last run… damn. I thought it was gonna be like a 5k, but she stretched it out to a full-on marathon.

Reagan Strange (Team Adam), “Wherever You Will Go” — Grade: D- | Oh dear. This wasn’t the way that Reagan or any singer ever wanted to go out. Perhaps consumed by nerves, she started off mumbly and pitchy, and though she got louder by and by, she never really got any less pitchy. I’ll give the 14-year-old credit for keeping it together and making it through the whole number, but that’s about it. Kymberli Joye and Sarah Grace were both way more deserving of this chance to win the Save.

Kennedy Holmes (Team Jennifer), “How Do I Live?” — Grade: B | Such a young old pro is Kennedy that she began singing for the Save as casually as if she was doing karaoke at a birthday party or something. But she was clearly shaken to find herself in jeopardy. She had bigger pitch issues than we’d heard from her before — not like Reagan-level pitch issues, but pitch issues. I was afraid she might not actually make it to the finals until the voting during the commercial break put her up to about 20 percentage points ahead of MaKenzie (who even I will concede gave the better performance).

So, your take on the results? Which elimination really stung? Vote in the poll below, then let rip in the comments.