Charmed wrapped the first half of its freshman season on Sunday with a series of game-changing reveals, putting the sisters’ big secret — as well as one character’s very existence — in jeopardy. TVLine spoke with executive producers Jessica O’Toole and Amy Rardin about how the events of the midseason finale will affect the Charmed Ones moving forward, but first, a quick recap:

Maggie and Mel’s dad not showing up for Christmas proved to be the least of the girls’ concerns when Hunter attacked them at home, forcing Parker to intervene and reveal himself as a half-demon, which led to Maggie breaking up with him. The sisters received additional assistance from the Sarcana’s flock of reinforcement crows, who apparently also tried to save Marisol from her unknown killer — at least according to Jada. Hunter eventually returned for a rematch, but was sucked into Tartarus (aka hell’s prison) by a portal opened by Parker. Unfortunately, he managed to drag Harry into the abyss with him — and as if that wasn’t bad enough, a stupefied Galvin watched the whole thing go down.

Below, O’Toole and Rardin tackle some of our burning questions from the midseason finale, including how Galvin will react to Macy’s secret and whether we’re imagining sparks flying between Mel and Jada. (Spoiler alert: We’re not!) 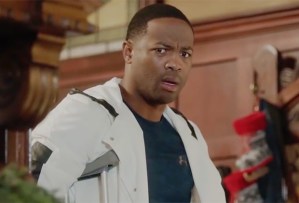 TVLINE | I’m guessing Macy won’t be able to use her old “drunk and clumsy” excuse on Galvin this time.
O’TOOLE | [Laughs] That’s probably good, because there are only so many times you can do that. We’re going for a whole new dynamic with [Macy and Galvin], and I think it’s going to be really fun.

TVLINE | I have to imagine the next episode will pick up soon, if not immediately where we left off.
O’TOOLE | Relatively speaking, yes. We’ll have a lot of urgent things to pick up with. Harry is now stuck in hell’s prison, so everyone is really worried about his fate, as are we. We’ll get to see hell’s prison. We won’t leave people hanging with that stuff.

TVLINE | I was surprised that Maggie learned Parker’s secret so soon. Was there talk of drawing that out longer?
RARDIN | We talked a lot about when we were going to reveal that to Maggie. Jessica and I were in the Jane the Virgin writers’ room for several seasons, and one of Jennie Snyder Urman’s big mantras is that it’s more fun to not hold secrets. “What happens if people know everything?” So we took that to heart in this episode with Maggie finding out about Parker and Galvin finding out about magic. We just thought it would be great to blow a lot of our secrets in the midseason finale, and we’ll see where the chips fall when we come back.
O’TOOLE | And we have plenty more secrets coming! 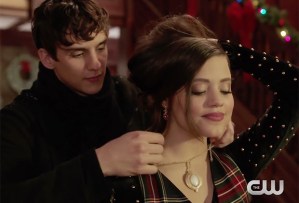 TVLINE | I get that they’re like the new Phoebe and Cole, but I just want to reach through the TV and shake her. She can’t take him back.
O’TOOLE | We talked about that a lot. We grew up in a time where bad boys were such TV tropes. You could do anything, but as long as the guy felt a little bad about all the people he killed, we all still loved that character and forgave them. Young women these days have much higher standards, which is great. We’re trying to revisit that relationship in a way that doesn’t just let him off the hook because he’s brooding about the bad things he’s done.
RARDIN | Jessica and I had a long conversation after the Kavanaugh hearing. We realized that we had internalized a lot of this stuff from growing up when we did. We had internalized finding that sexy and attractive and we came in the room after the hearing and we were like, “We have to talk about Parker!” It was really eye opening for us to talk about this bad boy in a different way.
O’TOOLE | We all love to watch TV villains do terrible things, and I think Hunter is an example of that kind of fun character. But if someone’s going to be with Maggie, it’s a different set of expectations. The “Parggie” struggle will continue. That’s what we’ve been calling them.
RARDIN | I saw online that people are calling them “Parkerita,” which is more fun.
TVLINE | I was thinking “Marker.”
O’TOOLE | That’s good too!
TVLINE | You know it’s a good ‘ship when you have so many names for it.

TVLINE | I was intrigued to learn that the Sarcana tried to help Marisol, at least if Jada is to be trusted. How is that Marisol mystery going to unfold?
RARDIN | We’re going to explore the mystery of who killed Marisol for the rest of the season. We have a lot of twists and turns in that story. We have a lot of mysteries to reveal. We’re excited to explore it. And we’ll continue to talk about the Sarcana. Like, we don’t know if they’re good or bad or good people with misguided intentions. We’ll play with that for the rest of the season, along with the Elders.
O’TOOLE | We’ll talk about how those groups contrast — how they’re different, how they’re similar. That’s a dynamic we’ll explore for the whole season.
RARDIN | And we’ll learn more about Jada, including her backstory.

TVLINE | Speaking of Jada, am I imagining sparks between her and Mel?
RARDIN | I think there are sparks!
O’TOOLE | I watched the episode again last night, and I saw sparks. I don’t think you’re imagining things.

TVLINE | That’s encouraging, though I have to admit — I really miss Niko. Will she back?
RARDIN | We can’t say.
O’TOOLE | We’ll just say that it’s Charmed, so anything can happen.

Your thoughts on last night’s Charmed fall finale? Grade the episode below, then drop a comment with your hopes for 2019.