Midge flies across the globe as Season 2 of Amazon’s The Marvelous Mrs. Maisel kicks off, but it’s not in pursuit of stand-up stardom — it’s family business.

The Season 2 premiere begins on an exhilarating note, with Barbra Streisand’s “Just Leave Everything to Me” blaring as we journey deep into the bowels of the B. Altman department store, where Midge is working as a switchboard operator. She got demoted from the Revlon counter, but she’s great at this, too, calmly helping harried coworkers connect their calls when they freak out. Plus, Susie’s fielding plenty of offers after Midge’s set with Lenny Bruce, so things are looking up. But Abe calls in a panic: Midge’s mom is missing. Well, actually, she isn’t missing. Rose just told Abe she was going to Paris… and she never came back. 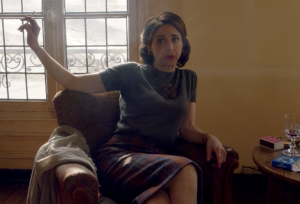 Midge quickly deduces that Rose actually moved to Paris: She told Abe she’s not happy and no one needs her here anymore, and she even emptied out her closet and drawers. (Abe wasn’t listening, apparently.) So Midge and her dad jet off to the City of Lights and find Rose happily smoking French cigarettes and living in a sparse apartment with a dog named Simone. She’s made a home for herself there, and despite Abe’s protests, has no intention of coming back to the Upper West Side.

At dinner at a cozy local bistro, Rose raves about her time in Paris and feeds Simone steak tartare at the table — but when Abe pushes her to fly back with them the next day, she informs him, “I’m happy here.” He storms off, intent on staying in Paris until she’s ready to leave with him. Midge takes her dad’s side, telling Rose she’s made her point, but it’s time to end this charade. She yells that Rose made a commitment to Abe: “You have to go back to him!” That’s when her mom fires back: “Well, look who’s talking.” Oof.

A discouraged Midge wanders into a smoky nightclub, where drag performers pull her up on stage to dance with them. But after they finish, she stays onstage and launches into an impromptu stand-up set, getting a New York transplant in the crowd to translate for her. She talks about her mom, her cheating husband — reminding the French audience, “That’s a bad thing” — and how unfair it is that the drag queens are hotter than her. (“You can’t run the world and have all the pretty underwear, too!”) When she talks about Joel, though, she flashes back to him handing her back his wedding ring after her set with Lenny Bruce, and gets so choked up, she has to walk off the stage mid-set. 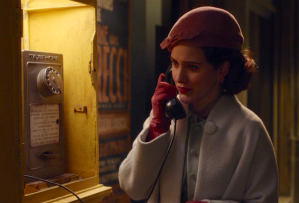 Alone in the world’s most romantic city and surrounded by young lovers, Midge calls Joel on a pay phone, wondering if there’s some way they can work things out, at least for their kids: “I can figure this out! I can figure anything out! I’m amazing!” Joel agrees, and he does love her, but he can’t be with her if she wants to continue doing stand-up. He doesn’t want her to quit, either: “You’re too good.” She fights back sobs as they say goodbye — maybe for the last time.

Elsewhere in the premiere: Susie gets accosted by two toughs who intend to rough her up, but end up befriending her once they discover they’re all from the same neighborhood (“This is the best abduction I’ve ever had,” she marvels); and Joel vows to get his own place to live after being forced to crash with his parents. (And having met his parents, we can’t blame him for wanting to get out.)

Give the Mrs. Maisel Season 2 premiere a grade in our poll, and then hit the comments to share your thoughts. (Please, no post-premiere spoilers, though.)