Because no Christmas story would be complete without a few angels — clad in bedazzled lingerie, as it was written — ABC on Sunday brought us the 2018 Victoria’s Secret Fashion Show, yet another traditional display of casual wear for the everyday woman.

Taped in November at New York City’s Pier 94, this year’s show was divided into seven segments, most of which sound like they could double as My Little Pony characters: “Glam Royale,” “Golden Angel,” “Flights of Fancy,” “PINK,” “Heritage,” “Downtown Angel” and “Celestial Angel.” The runway hosted some of the biggest names in modeling — Kendall Jenner, Candice Swanepoel, Winnie Harlow, Gigi Hadid and Behati Prinsloo, to list just a few — but all eyes were on Elsa Hosk, who had the honor of sporting the $1 million Swarovski crystal-ized Dream Angels Fantasy Bra.

Sunday’s festive extravaganza was also bittersweet, as it marked Adriana Lima‘s final walk in a Victoria’s Secret fashion show. The veteran Angel, hanging up her wings after two decades of representing the brand, did a special solo walk to the tune of Fatboy Slim’s “Praise You.” 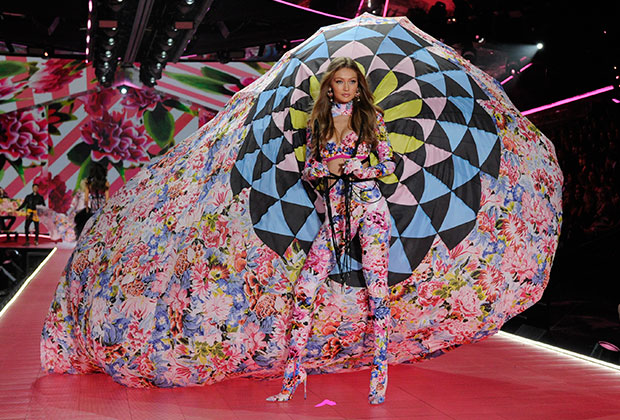 This year’s soundtrack came courtesy of Leela James (“This Is Me”), The Chainsmokers and Kelsea Ballerini (“This Feeling”), Halsey (“Without Me”), Bebe Rexha (“I’m a Mess”), Shawn Mendes (“Lost in Japan”), Rita Ora (“Let You Love Me”), and The Struts (“Body Talks,” followed by “In Love With a Camera”).

Browse photos of some of this year’s most outrageous runway getups — you can click here for direct access — then drop a comment with your thoughts on the fashion show below.