How will Grey’s Anatomy mark a TV milestone? Are triangles at hand on Timeless and Titans? Which NCIS agents will engage in baby talk? Who’s new on The Blacklist? Read on for answers to those questions plus teases from other shows.

Any scoop on when we will be seeing Alex and Jo’s family members on Grey’s Anatomy? –Jasmine
Possibly…? Sometime in early 2019, Grey’s Anatomy will breeze past the 331 episode mark and, in doing so, surpass ER as TV’s longest-running medical drama. And sources tell TVLine that Grey’s is planning to quietly, cheekily acknowledge the milestone with a special episode that is — get this — medicine-free. That’s right, the record-shattering outing — to be directed by Chandra Wilson — will feature nary a single medical story line.. Our guess: This will be the long-awaited installment that reunites Jo with her MIA parents, an episode Camilla Luddington first hinted at on Tube Talk.

Will Titans‘ Donna Troy (The Man in the High Castle‘s Conor Leslie) be brought in as the third member of a love triangle with Starfire and Grayson? –Louis
Donna and Dick do share a certain spark during her first appearance this Friday on the DC Universe series, though it may be one more born of teenhood friendship (as symptico sidekicks) and now professional respect. And other parts of the episode indicate that things are going well for Dick and Kory’s… connection. But this I must add: Friday’s cold open is laden with DC Easter eggs, and across the entire episode, so. many. names. are dropped. 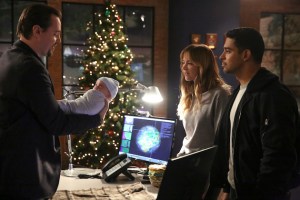 Any news on NCIS‘ Bishop and Torres? I’m surprised at how much I like their interactions. —Michael
In the CBS drama’s Christmas episode (airing Dec. 11), Torres and Bishop will be parents to a newborn! Or at least pretend to be. (The baby is discovered when they go to arrest a suspect and the tot has zero identification or ties to any family. The agents thus decide to watch the baby overnight in hopes they can find a parent as they work to solve the case.)

Chicago Med‘s Connor now knows the truth about his hybrid OR, but did Ava just go to dinner with his father or there’s more we’ll find out? —Adriana
“There’s more for Connor to find out,” executive producer Diane Frolov hints. So… take that as you will.

Any scoops on the Timeless movie, particularly for our favourite couple, Lucy and Wyatt? –Ariel
“There’s a little triangle going on” with Lucy, Wyatt and Flynn, star Matt Lanter shares. “I think that Wyatt thinks he needs to win Lucy back. I think he believes he messed up big time” when he chose to be with Jessica. But in his defense, “he’s a good guy” who was “following more of what’s the right thing to do as opposed to his heart,” the actor adds. “That’s a point that he stresses through this finale (airing Dec. 20), that he was just trying to do the right thing. And as much as a lot of fans don’t see it that way, our characters do. You actually see Lucy with compassion and understanding of the choices that Wyatt made.” 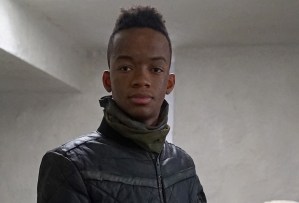 Any news on the upcoming season of The Blacklist? —Aly
Coy Stewart (aka Agents of S.H.I.E.L.D.’s Flint) will recur during Season 6 as a young man caught in the prison system for crimes he didn’t commit; during his time behind bars, he has learned how to keep his head low and blend into the scenery, a skill that has served him well. (Reminder: The Blacklist returns with a two-night premiere on Thursday, Jan. 3 at 10/9c and then Friday, Jan. 4 at 9 pm.)

When will Animal Kingdom Season 4 be airing? –Melanie
Let’s assume the usual summer, seeing as production on Season 4 doesn’t start until January.

What can you tease about Supernatural‘s Nick? –Patrick
When Dean, Sam and Cas finally find out Nick’s murderous actions, the fallout is “not going to be pretty,” Mark Pellegrino teases. “It’s going to be very violent.” 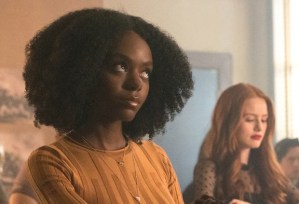 Anything on Riverdale? –Rebecca
During our recent visit to the set, Ashleigh Murray teased, “There are things coming up for Josie’s love life, which I am excited about. That’s all I can really say because we’re only just now kind of broaching that, but there’s definitely going to be some tangible lovey-ness happening this year.”

Will Legends of Tomorrow‘s Sara ever mention her father’s death, even if it’s just one comment? –This Is B
Thus far not yet during Season 4, though Caity Lotz says, “It’s something I think that could come back at any time because, obviously, that’s something that will affect your whole life…. There’s so much to do in this season and in this world, and with so many characters…. It’s hard to fit it all in there, but I’d like to.” 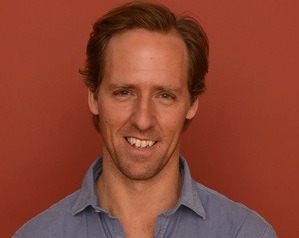 Do you know how many episodes were ordered for Life in Pieces Season 4? And do you have any scoop on the upcoming season? –Mallory
During one of the CBS comedy’s yet-to-be-scheduled season’s 13 episodes, Nat Faxon (Married) will guest-star as the frazzled proprietor of a super-rustic Yucatan Eco-Resort where the Short family vacations to celebrate John and Joan’s anniversary.

What can we expect from Legends of Tomorrow‘s Mona? –Derrick
As suggested in this past Monday’s episode, “She gets very involved in a lot of the action,” says new series regular Ramona Young. “And she may or may not even start developing feelings for one of the captives….” 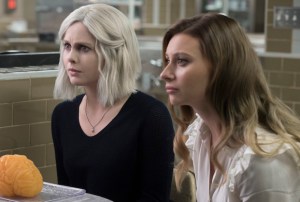 Will Peyton play a bigger role in iZombie Season 5? –Clarissa
She’ll certainly have a bigger role within Seattle’s political scene, as the city’s acting mayor. “She has a lot of responsibility now on her plate,” her portrayer Aly Michalka told us at The CW’s fall launch event last month. “She goes through some rough stuff with her job about halfway through the season, so it’ll be interesting to see where she ends at the very end, if she’s still the acting mayor or if that job has been pulled out from under her.” Peyton’s new gig will also put her “at odds” with new Fillmore Graves boss Major “because what they’re fighting for isn’t necessarily the same thing,” she previewed.

Are we ever going to see The Flash‘s Barry deal with the fact that he’s going to disappear? –Jen
When we spoke with Grant Gustin during production of Episode 11 of Season 5’s 22, he ventured, “I think as we get closer and closer to the finale, it’s something we’re going to see him deal with…. I think that’ll be something that continues to pop up — until/if we get to a 10th season” (at which point it will be “time” for Barry to vanish).

Real questions get real answers! If you need the Inside Line on a favorite show, email InsideLine@tvline.com! (With reporting by Vlada Gelman)