On this Thursday’s Supernatural (The CW, 8/7c), Dean, Sam and Castiel prove that family doesn’t end with blood as they rally around Jack, who recently lost consciousness after weeks of coughing up blood.

Following his collapse, “you knew that probably Jack was headed to a not great place,” executive producer Brad Buckner tells TVLine. “Jack is going to be undergoing some changes that the boys are going to have to deal with. … It can go to a very dark place.”

As the former Nephilim’s condition takes a turn, his trio of father figures pull out all the stops to help him because “he’s become part of the family,” star Jared Padalecki says. “We see how hard the boys fight to protect those they love. We’ll see them go to all ends of the Earth.” 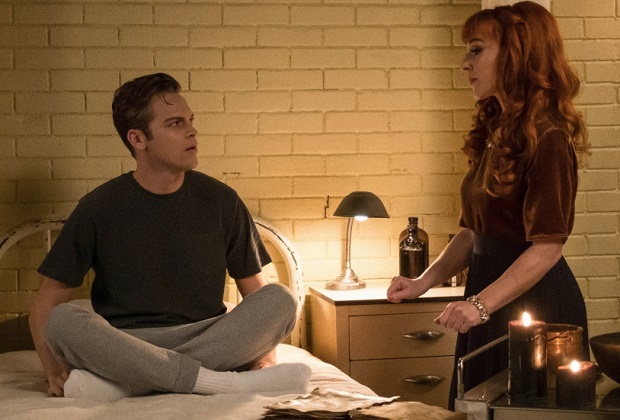 Their efforts include enlisting the witchy powers of Rowena, who’s understandably conflicted about assisting Jack, given her history with his biological father Lucifer. “As usual, they need her help. She doesn’t ever get enough credit for that!” co-star Ruth Connell notes with a laugh. “And so she comes, and then they tell her, ‘Oh, by the way, this is Lucifer’s son,’ and she’s like, ‘Stop the bus.’ Then she sees him. She’s got a soft spot for him immediately.”

Dean, too, has grown to care about Jack immensely over the past season and a half, which only makes the boy’s plight all the more concerning for the elder Winchester. “He’s got this kid who he was so bad to when Jack first appeared,” Buckner describes. “Now he feels this tremendous guilt because the kid seems to be in a lot of trouble. He takes it very personally, like he always does. “

Jack’s other “dad,” Cas, isn’t handling the situation much better and is also piling on the man pain. “He’s not taking it well,” Misha Collins previews. “I think Cas feels like he put his entire self-worth on the line in promising to take care of Jack, and if something happens to Jack, he’s going to be completely overwrought and self-loathing.”

But for Jack, there’s a bright side to his condition: It gives him a chance to spend some quality time with Dean, enjoying the simpler joys of human life. “I really like the next episode because we get to see Dean and Jack go on their own little road trip, which was super enjoyable for me to shoot,” Alexander Calvert, who plays the ex-Nephilim, shares. “To see Jack go on his first and last joy ride was really fun to shoot.”