A dark cloud of foreboding hung over Tuesday’s episode of The Voice. Going into the Top 11 results show, I was sure, absolutely sure, that two vocalists I really liked were destined to sing for the Instant Save: Team Blake’s Dave Fenley, whose fan-assigned cover of Bill Withers’ “Use Me” was going to make it easy for viewers to add “Ref” before the song’s title, and Team Kelly’s Sarah Grace, whose rendition of the fan-chosen “Dog Days Are Over” had sounded like Florence + the Malfunctioning Machine. 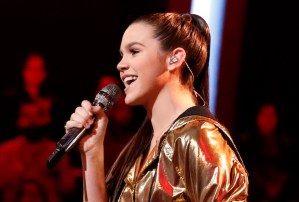 Were the proceedings more of a singing contest than a popularity contest, I’d have thought Team Adam’s Reagan Strange was also a contender for the Bottom Two, given that not only did she perform Avril Lavigne’s “Complicated” while smiling ear to ear as if she didn’t understand a word that was coming out of her mouth, but she also sang so flat, I wondered if her earpiece was switched on. However, since she’s made a connection with young viewers that old soul Sarah hasn’t — Reagan was the most-streamed artist for the second week in a row — it was Sarah’s stank face I feared we’d be seeing for the last time.

Of course, before I — we, any of us — found out if my dire predictions of the Bottom Two were correct, Blake Shelton joined his rock-solid team for a pleasant-enough performance of Alabama’s “Dixieland Delight” (which has to be the first song I’ve ever heard that included the term “turtle-dovin'”); Comeback Stage coach Kelsea Ballerini turned in a laid-back performance of her catchy single, “Miss Me More”; and JHud joined her team for a cover of “The Rose” that really blossomed when all three of them sang together.

Lynnea Moorer (Team Kelly), “Tattooed Heart” — Grade: C- | After the comeback kid managed to send Adam’s teenage dream Tyke James packing, I started to think that maybe she’d have legs in this competition despite the handicap of her not having joined a team till the Top 13. But if she had legs, they appeared to be quite short ones. Her Ariana Grande cover started off pretty good and included quite a few moments that made me think, “OK, she can sing.” Unfortunately, her performance was overall pretty lackluster and included as many pitchy parts as not. Welcome to the Go-Forth Stage, kiddo. 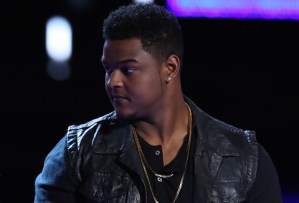 DeAndre Nico (Team Adam), “Take Me to the King” — Grade: A- | Hmm, I hadn’t loved DeAndre’s Jodeci cover Monday, but a) it definitely showed that the guy has a voice that doesn’t quit, and b) it definitely shouldn’t have put him in danger of going home. (There were way worse!) And really, it didn’t seem like he was in any danger of going home. The minute he started singing for the Save, it became apparent how outgunned Lynnea was. He demonstrated enviable range and control, earned himself one of JHud’s shoes and had to have made a lotta viewers sorry they hadn’t voted for him Monday.

Were you satisfied with the results? Who would you have eliminated? Vote in the poll below, then hit the comments.