This Tuesday’s New Amsterdam marked the show’s fall finale, so we knew something was going down — but we didn’t expect one of the doctors to literally fall down. 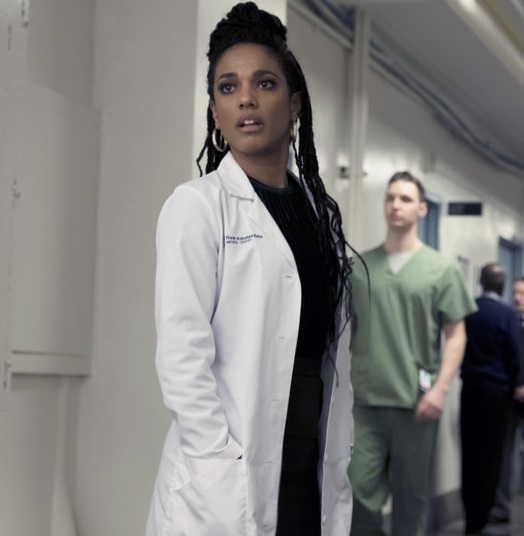 As the episode begins, Max and Helen are arguing over his course of treatment: He wants to do a clinical trial rather than suffering through the brutal side effects of chemo and radiation, while she thinks a clinical trial is akin to “gambling your life on a lottery ticket.” Although Max eventually gets his way, Helen is still dubious of the trial, telling the doctor in charge of it (guest star Sendhil Ramamurthy) that she knows all about his reputation for charisma and salesmanship, “and I am immune. Because I have the same reputation.” Her bluntness charms the doc, who not only accepts Max into his study, but also asks Helen out.

But back to Max, who learns that there’s a sick patient in the hospital with a heart from his dead sister. The woman, Sarah, informs Max that they met on the day of his sister’s funeral, when she saw him at a nearby lake and taught him how to skip stones. Listing all the wonderful things she got to do after the transplant, Sarah declares, “Time for me to go. Your sister, she gave me a beautiful life,” to which a tearful Max responds, “It’s the other way around.” He then makes it his mission to save Sarah’s life, and once he does, she gifts him with an urn, which he takes to the lake. After he spreads the ashes in the water, the serenity of the moment is broken. Max suddenly grabs his neck and abruptly collapses, as his wife screams for help, but there’s no one else around. 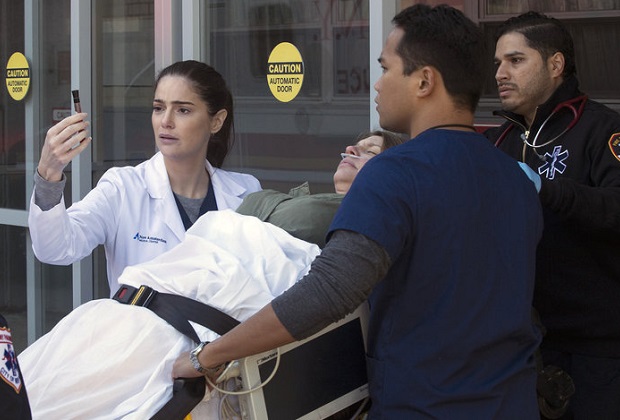 Back at the hospital, Lauren is scrambling to hold it together, personally and professionally. She not-so-reassuringly insists to Evie that she and Floyd are over, then secretly pops a pill. Speaking of pills, she almost gives the wrong medicine to a patient, but Casey covers for her. When she promises that it won’t happen again, Casey reveals that he’s been fixing her mistakes for a while, and they’ve only been getting worse. “Dr. Bloom, I think you may need help,” he tells her.

Elsewhere in the episode, Iggy counsels a transgender teen who wants top surgery. After Iggy denies the request for a year, the teen lashes out on social media, calling the doc “a transphobic loser.” But really, the kid was just scared to let down all his followers who were excited for the surgery and helped raise the money for it.

Finally, Dr. Kapoor gifts Ella with $2,000 for her sick dog’s surgery, because he wants to use his money to help those he cares about.

What did you think of New Amsterdam‘s fall finale? Grade it via the poll below, then hit the comments!