Agent Liberty finally granted James an exclusive sit-down on Sunday’s Supergirl, only the photojournalist-turned-vigilante didn’t exactly get to call the shots. In fact, the non-interview was merely Ben’s way of once again attempting to woo James to his side, explaining that Guardian represents everything his followers aspire to be. James deflected the masked man’s flattery, but to little avail. “By tomorrow night,” Ben told him, “Supergirl will be dead.”

Spoiler alert: the show’s title character survived the episode, though she found herself in a heck of a pickle when Manchester Black turned her over to the Children of Liberty in exchange for an audience with their leader. (I know J’onn likes to give people the benefit of the doubt, but maybe it’s time Kara stops taking advice from him for a little while.) The situation became even more bleak when the Children forced James to record a message of support, then trigger a bomb that would destroy an imprisoned Supergirl.

When Manchester realized that the Children lied to him, setting up a meeting with someone other than Ben, he double crossed them, freeing Supergirl at the last minute. (No one double crosses a double crosser and gets away with it!) Kara, naturally, isn’t sure how to feel about Manchester anymore, nor is J’onn, who fell to pieces, ending the episode weeping on Kara’s shoulder. 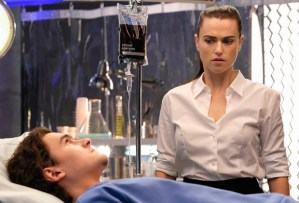 Meanwhile, Lena reluctantly moved ahead with her experiment’s human trials, and although she did her best to keep her test subject at arm’s length, she developed an unlikely bond with the handsome, troubled guinea pig. She even played therapist, helping him work through his feelings of inadequacy and unworthiness, both results of blaming himself for his brother’s death. In the end, he decided that potentially becoming super in order to make the world a safer place — and, you know, survive — could be his true purpose.

* Isn’t it weird that we’ve gone another week with no mention of the Red Daughter (aka the other Supergirl)?

* In what world would more people having superpowers prevent another Civil War? If anything, it would probably speed up the process.

Your thoughts on this week’s Supergirl? Drop ‘em in a comment below.