When DC’s Legends of Tomorrow first launched in January of 2016, the number of men on the cast more than tripled the number of women. Surveying the CW series’ ensemble now… oh, how the times have changed (no pun intended).

Season 4 of Legends counts six female series regulars — including new addition Ramona Young (Z Nation) as Mona Wu — versus four fellas. (Filling out the ladies’ ranks are Caity Lotz, Tala Ashe, Maisie Richardson-Sellers, Jes Macallan and Courtney Ford, the latter two of which were promoted to series regular over the summer. And let’s not forget that Amy Pemberton voices Gideon.) It’s quite a shift for the time-traveling drama, which started taking shape three years ago with episodes of Arrow and The Flash that featured Carter Hall/Hawkman, Kendra Saunders/Hawkgirl and Vandal Savage, and following Sara Lance’s October 2015 resurrection via Lazarus Pit. 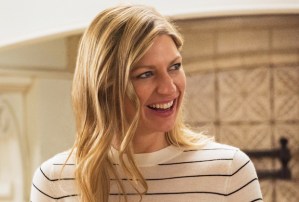 During TVLine’s recent visit to the Legends set in Vancouver, frontwoman Caity Lotz spoke to the rare instance of having an actress-heavy cast, which truly came to the fore with this past Monday’s episode, “Tagumo Attacks!!!” (Among The CW’s four other superhero shows, only Supergirl, by a 5-4 count, also skews female.)

“It’s really nice to have that energy,” Lotz shared. “When you’re working together and you’re filming, [it’s nice] to not always be surrounded by a bunch of male actors and a bunch of male crew where you’re, like, having period cramps and you’re like, ‘I can’t talk to anyone about it!’ It’s nice to just be able to have some of that sisterhood. It feels really good.” 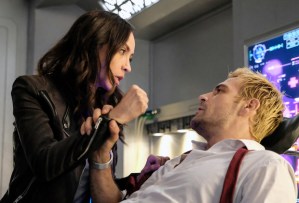 But for Lotz — who with numerous other Arrowverse actresses promotes Shethority, an online community designed to empower women and “reclaim the female experience” — the unique gender split among cast members is just a sign of the times. “You know what, it just feels like it’s not a big deal anymore,” she said. “It’s not like, ‘Oh my god, women!’ It used to feel like that. Now, it just feels normal.”

Tala Ashe, who came on board during Season 3 as Zari Tomaz, TV’s first Muslim-American superhero, echoed the feeling that to see such female representation on a broadcast-TV series is “really great.” Relaying a fitting anecdote during our set visit, she said, “Today there were three women in one scene, and then two other women came into that scene, and it was frickin’ great.”

Not that the scene lacked any unbridled testosterone. Original cast member Dominic Purcell‘s “Rory was in the corner, as usual. Sleeping,” Ashe noted with a laugh. “So overwhelmed by the women!” (Reporting by Vlada Gelman)

Arrowverse Pop Quiz! Which Cast Knows the Other Shows Best?