A Darhk force might be John Constantine’s only hope during this Monday’s Legends of Tomorrow (The CW, 9/8c). After siphoning off some of his own life to save a young boy, Constantine last week was left on death’s door. And with Gideon unable to heal him, the Waverider crew is forced to turn to an unlikely ally in tonight’s episode: their former foe Nora Darhk, who’s currently trying to live a regular life. (Well, as regular a life as one can have while working at a Renaissance fair.)

“She is recruited to help revive Constantine, and that’s very challenging for her because she’s been keeping away from magic,” Brandon Routh, who plays Ray, previewed during TVLine’s set visit. When Ray enlists Nora’s aid, he’s “asking a lot of her to help John in this way.” 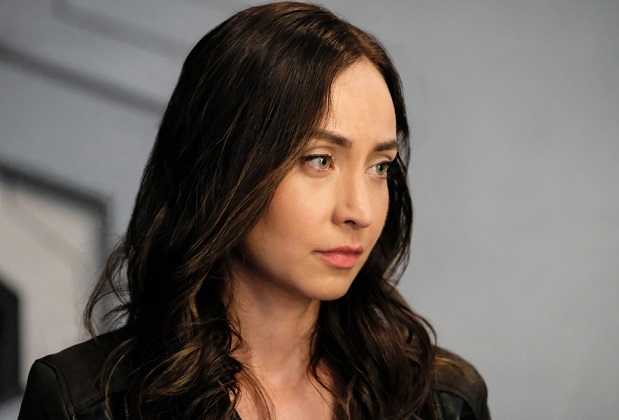 The idea of tapping back into her abilities is “really frightening” for Nora, her portrayer Courtney Ford shared. “It is something that she struggles with, because her magic is tied to her father, and even though she had such incredible love for her father, that relationship was also dysfunctional. She received a lot of pain from it, and the world received a lot of pain from Damien Darhk. So right now, Nora’s trying to figure out who she is without her father’s influence and without Mallus’ influence.”

Nora’s decision about whether or not to use her powers is further complicated by the fact that she and Constantine share a past. “The last time she saw him, she was 13,” Ford noted. “There’s a lot of history there…because he did try to save her, but ultimately didn’t. She went on the path that she went on, and it all, I guess, turned out OK. But to know that someone was there and had the power to help her and tried so hard, but ultimately wasn’t able — and he didn’t try again — there are very complicated feelings there. So to get Nora and Constantine in the same room now was very exciting and intriguing to me.”

Matt Ryan, who plays Constantine, added: “What’s great about the relationship with Nora is she was a kid when John tried to help her, and he slightly abandoned her, and now she’s a grown woman. So that dynamic is really interesting.”

Much like Constantine, Nora has extensive knowledge of magic, making her a perfect match for the master of the occult. “She would have been great on the original [Constantine series], as well,” Ryan said. “The relationship he had with Zed [played by Angélica Celaya on the NBC drama] was kind of as a mentor figure to her. That’s like that here, but Nora is a lot more experienced than Zed was. They are a lot more on an even keel, which is a good kind of dynamic to play.”