This week on Arrow, Felicity crossed a line or two in the latest pursuit of Diaz — perhaps setting in motion the events leading to her future death.

IN STAR CITY | With Anatoly now back in the mix, Felicity tasks the Russian with copying the hard drive of a comrade of his who is poised to help Diaz build a weapon. Anatoly manages to do so, but barely escapes with his life. That leads to a prickly conversation in which Diggle questions how far Felicity is willing to go to get Diaz, whether the intel she was after was worth the price of Anatoly’s life. Felicity argues that they only now have a lead on Diaz because she didn’t give up, suggesting that Diggle did; he counters that he was actually “pushed out” by her. And now that he sees that she is willing to risk innocent-ish lives, he must worry: “I hope when this war is over, you still come out a hero.”

Laurel meanwhile finagles a visitation with Oliver, in part to get a read on his physical condition to support the case she is building. He gives her the cold shoulder, though, saying that she is nothing like his Laurel, and as such she better steer clear of his wife. Later, after Felicity begs her to stay on the case, we (and Dinah) see Laurel present her findings to a federal court and argue that since 1) the FBI has not upheld its end of the deal, 2) Oliver has been abused and 3) Oliver passed up a chance to escape, he should be set free. The judge rules in favor of investigating the violations at Slabside as evidenced by the data Oliver had Talia smuggle out, but she rejects the bid for his freedom. Later, Laurel is poised to unleash her sonic cry on the judge in the parking lot, but Dinah stops her, reminding her of the speech she gave in court, about how it’s “the hardest thing to be a hero when no one expects you to be.”

Having realized that Diaz has rigged two bombs to the city gas lines, Felicity and Curtis set out to hack the timers on-site, while Diggle, Dinah and Rene tussle with Diaz, Kodiak and Silencer. After Felicity and Curtis deactivate the timers, Diaz goes to trigger the bombs remotely — but a fwip! from New Green Arrow knocks his phone out of his hand. Diaz is then captured, while the Longbow Hunters slip away.

Armed with a gun given to her on the down low by Anatoly, Felicity confronts Diaz in private at the cop shop. He taunts her about not being ready for the big boys’ table, and Laurel arrives just in time to keep Felicity from pulling the trigger — because, she explains, they need Diaz as part of a trade for Oliver that Laurel just brokered with the feds. Snapping out of her vengeful state, a tearful Felicity realizes: “Oliver’s coming home?!”

INSIDE SLABSIDE | When Dunbar, the new guard in charge, turns up murdered, Stan is dragged into the hole as the prime suspect. Stan beseeches Oliver to make like Green Arrow and save his bacon, so Oliver gets to poking around the scene of the stabbing, where he uncovers a shiv belonging to Turner aka Bronze Tiger. That discovery gets Turner dragged away and Stan set free. Yet upon reuniting with Oliver, Stan seems to know more than someone stuck in isolation could have known about the exculpatory evidence. Hmmm…. 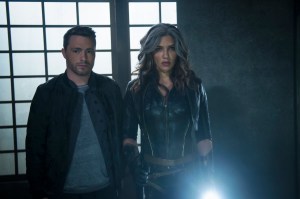 IN THE FUTURE | Dinah explains to a shell-shocked William that not only is Felicity dead, but she was murdered, a couple of weeks ago, having run around in “dangerous circles” using her dad’s code name of The Calculator. Dinah similarly tells a disbelieving Roy that the Felicity they knew back in the day was “very different” from the person she became. Regardless, William is determined to find out why she sent him the signal she did.

As they explore the decrepit Smoak Tech, William and Zoe reconnect, while Roy tells Dinah that Star City is the last place he wanted to come back to. When Dinah asks what in fact lured him off of Lian Yu, he explains that a note found inside Oliver’s bow referenced “The Mark of Four” — which Dinah exclaims is “impossible!” She asks Roy if they can trust William, and when Roy notes, “He’s Oliver son,” Dinah shoots back, “That’s exactly what worries me.” After triggering security protocols that required the silliest “access code,” William calls up the last files Felicity accessed: digitized maps of Star City buildings… as well as a plan to level the entire area outside the Glades! Dinah questions if continuing this quest is worth the risk, to which William counters that they’d do it for the Felicity they loved. He then researches the last person she reached out to — named “Blackstar.”

What did you think of the episode “Due Process”?