The following contains spoilers from The Last Ship‘s series finale.

As initially envisioned for a hot second, TNT’s The Last Ship would have ended its five-season run by not only revealing that Tom Chandler came out of the war with Colombia alive, but by then showing how he went on to live.

As the action-thriller neared its very end on Nov. 11, “the man who saved the world” — teetering underwater between life and death after steering the Nathan James into the enemy’s battleship — embarked on a surreal stroll through his ship’s decks, where he was visited by colleagues lost and loved. And while it was an emotionally charged ending to the hero’s odyssian journey, one that fueled his decision to rebuff a watery grave and swim to the surface, some viewers may have felt robbed of a proper epilogue that neatly circled back on every character.

TVLine asked Last Ship showrunner Steve Kane: Did Chandler’s reunion with the dead come at the cost of a traditional epilogue?

“Part of me likes the fact that it ends the way it did, because it lets you kind of get stuck in the energy of the show,” he answered. “But to be truthful, when we first broke the episode I had a full epilogue. We couldn’t afford to shoot it, but I can tell you what it was.” 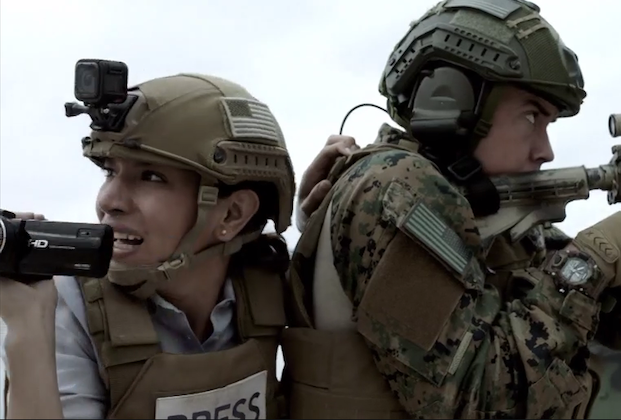 Some time after the aforementioned sequence in which Tom survived the James’ sinking, “The reporter, Nina (played by Graceland‘s Jamie Gray Hyder), was going to show up at his house having finished that film that she made, with all those interviews,” Kane shared. “The idea would be to show where our characters are now, to see the ‘happily ever after.’ Nina’s film would have been a catharsis, like the end of Cinema Paradiso.” Among the highlights would be the reveal that Tom did start a life with Sasha, and we may have glimpsed the boat she dreamed of them sharing.

Kane made clear that this full epilogue “was never written,” and only briefly existed as an idea in the writers room. Why was it nixed? In addition to requiring shoot days the production didn’t have, “it felt a little too pat,” he noted.

“I chose not to include it in the script because I’d rather leave the future for our characters open for everyone to come up with their own version,” he explained. “Your vision of Tom and Sasha — did they ever get that sailboat?… and Miller — do things work out with his new girlfriend?… and Danny/Kara — does the family reunite?… and Slattery and Jeter — do they stay with the Navy or build new lives for themselves?… is ultimately more important than what I have to say about them. And I like the idea of keeping their story alive and unfinished, even though the prevailing feeling I take away from the finale is hope. So I hope everyone’s doing great, and I have a good feeling they are.”

Are you satisfied with how The Last Ship ended? Or would you have liked to see the reporter’s completed film?