Thanksgiving dinner is served on Sunday’s Supergirl (The CW, 8/7c). But before anyone has a chance to give thanks for life’s many blessings (Sam Witwer’s jawline, etc.), a scuffle with the Children of Liberty cuts the celebration short.

“All of the Superfriends come together for Thanksgiving dinner, and like pretty much every Supergirl get-together, we’re forced to … scatter and go off and try to save the city,” Jesse Rath told reporters during a recent visit to the show’s set. “You get to see Braniac get froggy with a couple of Children of Liberty thugs. It’s just a scene that I have been waiting for for a long time. I’m excited for everyone to see that.”

What’s more, Brainy’s gravity-defying fight moment — for which Rath did his own wire work — is reminiscent of Quicksilver’s slow-motion action sequence from 2014’s X-Men: Days of Future Past, which was set to Jim Croce’s “Time in a Bottle,” though Rath insists it’s not Supergirl‘s “answer” to the iconic scene.

“I think it’s just relevant because I deal with time,” he says. “I’m in quite a bottle, one would say, this predicament I’m in. … Brainy will do everything he can not to fight. He uses violence as a last resort. He always tries to use his brain to get out of any situation. But in this situation, he is forced to fight — and the way he fights is by barely lifting a finger. He keeps his hands behind his back and when he needs to, he only uses two fingers to either budge this guy’s shoulder and has this guy punch that guy, and that guy kick that guy, so they all end up hurting each other. I thought it was a really cool concept and I was very excited to shoot that fight scene.”

We’ll also be seeing more “awkwardly quirkly” interactions between Brainy and Nia Nal. “The scene and the situation is more intimate,” Rath teases, “but it’s still just as awkward as ever. It’s something we have fun playing with, so there are more Brainy/Nia scenes to come that I’m really excited to see. They are painfully sweet.” 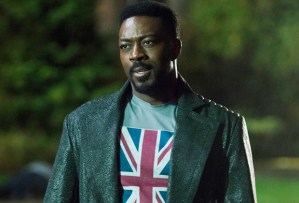 J’onn, meanwhile, will be preoccupied with Manchester Black, who’s become “quite a handful” in the wake of Fiona’s death, David Harewood says. “As far as J’onn’s concerned, he is a lost soul that needs to be brought back into the fold or given a new direction. But with him losing his love, we’re about to see a very different side of Manchester Black. … The only way Manchester sees of solving crimes is kill people. J’onn and Kara, that’s just not what we do but I still think he’s worth saving even though he’s a violent psychopath.”

Your thoughts on Supergirl‘s fourth season thus far? And in honor of the holiday, for which development are you most thankful? Whatever’s on your mind, drop it in a comment below.