Coco St. Pierre Vanderbilt may have fared better than some of her fellow witches in Wednesday’s Apocalypse finale, but that doesn’t mean Leslie Grossman was ready to say goodbye to her fan-favorite American Horror Story character. “What’s the cheesy Dr. Seuss quote, ‘Don’t cry because it’s over, smile because it happened’? That’s the place I’m in right now,” the actress tells TVLine.

“I always find it cringey when actors talk about their characters like they’re real people, but I’m going to go ahead and do that in this interview,” Grossman says. “You start off thinking Coco is one way, and then you find out she’s just the sweetest person who wants to do anything she can to protect Mallory and the coven. I saw her as someone who didn’t have much direction in life, just this spoiled rich girl who never had any reason to do anything on her own, and then she found out she has this special power and I think she felt she really found her calling. Coco was just the silliest, sweetest, most fun character to play.”

Below, Grossman dives deeper into her character, reacts to some of the finale’s biggest twists and even builds her dream Real Housewives coven:

TVLINE | I won’t lie, I was waiting to find out that Coco was the real Supreme.
Everyone kept saying that! And it would have been hilarious. There’s actually this great little scene that was cut between me and Angela Bassett in the finale, right after Madison shoots Michael and we’re all running up the stairs. Angela’s character stops me and asks, “What can you do? What’s your power?” It’s this really funny moment where I say what I can do and she just stares at me, and then I go, “I know, I’m useless!” And she gives me this awesome little pep talk in that incredible Marie Laveau accent. She says, “You are a woman and a witch. Never underestimate your power. You can do this!” It was such a great little moment, I’m so sad it didn’t make it to the finale. But there was so much stuff to get through in such little time. … I think that if the story had continued, we might have seen that Coco’s powers would continue to grow — maybe into something a little more helpful to the safety of the witches, other than their cholesterol.

TVLINE | We didn’t see Coco in that final scene at the school, but is it safe to assume she would eventually make her way there?
First of all, I am not ashamed to say that I cried during that last scene. I got really emotional when I saw that. It was so nice! That was Mallory’s first day, and she’s already been there for a while by the time Coco shows up, so I think that Coco is still coming, yes.

TVLINE | A new Antichrist is also apparently coming. What was your reaction to the end of the episode?
My reaction was, “Oh, s–t!” There’s no such thing as a happy ending on American Horror Story, so I thought it was the perfect way to wrap it up. I have no idea what Season 9 will be about, and I have no idea if this is a story they’d ever want to revisit, but I think it’s so clever to always leave the door open. I also love Ashley [Santos] and Kyle [Allen] so much, so I was happy to see them back, even if it was only for a few minutes.

TVLINE | It was a lot to process. Were there any points this season where you needed the producers to explain what was going on?
That was more the case for me with Cult; they gave me a three-page typed timeline so I’d understand where things fit. There were a couple times this season where I needed some debriefing, but I’m deep in that world, so it all makes total sense to me. 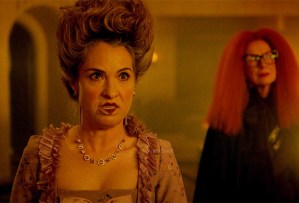 TVLINE | I loved seeing Coco back in her Marie Antoinette costume for the finale. Did you film those scenes earlier in the season, or did you have to get back into that elaborate getup?
Oh, I got back in that wig and back in that outfit. It’s not like all of the episodes are written when you start filming. They’re writing as we’re filming, so while we were filming Episode 8, I saw the wig back in the hair and makeup case. They were getting it ready, and I was like, “Wait a minute! What do you know?” And Michelle Ceglia, who’s the head of the hair department, was like, “I haven’t read it… but I know she’s coming back.” We’d gotten it down to a science by the end, but that wig was heavy. And didn’t it look great? It was worth it.

TVLINE | It really was. But I agree with the person who tweeted at you saying that Coco should have told Michael how many calories were in the heart he ate.
That would have been hilarious! I can’t believe it didn’t occur to me to say something while we were filming. … And can I just say, isn’t Cody [Fern] great? He had to lick that heart, and trust me, the stuff they had it covered in did not taste good. And he never complained, so I really have to give it up to him.

TVLINE | How many calories would you guess are in a human heart?
I would guess 482 calories. Something in the 400s range. It seems dense.

TVLINE | I bet one of the Real Housewives could tell you the answer.
[Laughs] You know, you’re not wrong.

TVLINE | If you could build your dream coven out of, let’s say, five Housewives, who would be in it?
Oh my God, this is such a good question. For sure Bethenny [Frankel], because she would get s–t done. Wait, is this five including me? Or in addition to me?

TVLINE | Let’s go with “in addition to,” a la Kyle Richards.
OK, this is very hard. It’s like choosing between my children. I’d definitely pick NeNe [Leakes]. Also Leeanne Locken from Dallas, because she’s scrappy as hell and would stop at nothing to survive. I feel like she could be relied on to really go there to keep the coven safe. … But I also love Mama Dee so much. I know that I’m going to think of 10 more names while I’m falling asleep tonight and it’s going to kill me. I’m taking this question very seriously, by the way. OK, so we have Bethenny, NeNe and Leeanne. Oh God, I want Sonja [Morgan] there — I need Sonja there. I want to have fun, and I feel like Sonja can party. She would take the edge off when things got really gnarly. And I think I would need Erika Jayne, just for the glamour. That would be a really f–ing good coven! … I have to say, though, that was hard. And I keep thinking about [Lisa] Rinna. I think Rinna would be an awesome coven member. … I don’t think you understand how hard that was for me.

Your thoughts on Apocalypse‘s conclusion? Grade the finale and the season below, then drop a comment with your full review.