With only one episode left in its run, American Horror Story: Apocalypse has a ton of ground to cover — and earth to scorch — in Wednesday’s finale (FX, 10/9c). And while we know this franchise better than to expect answers to all of our questions, we wouldn’t mind a more conclusive ending than we’ve received in seasons past.

And we’re not talking about basic questions like “How will the witches stop Michael?” or “Wait, is that the back of Angela Bassett’s head in the promo?” We’re talking about specific, (mostly) plot points that have been bugging us since Apocalypse premiered all those weeks ago, including… 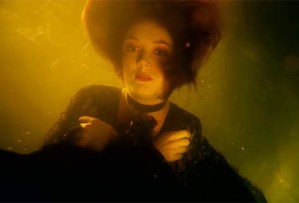 1. What is Mallory? It’s been the biggest question on every Horror Story fan’s mind since we saw Billie Lourd’s character turn that wounded old deer back into a spritely young fawn: What the heck is Mallory?! We’ve heard every theory under the sun — angel, goddess, fairy, God’s daughter, etc. — and at this point, we’d settle for any.

3. Is Apocalypse connected to any more seasons? Horror Story‘s eighth installment has liberally included elements of Coven, Murder House and even Hotel, but what of the other four? Naomi Grossman has guest-starred this season, so a surprise appearance from the one and only Pepper remains a possibility, as does the return of Sarah Paulson’s iconic journalist persona Lana Winters. Either (or both) of those would complete the circle, officially tying Apocalypse to Asylum, Freak Show, Cult and Roanoke. (This season’s multiple “blood moon” references could be considered wink-nods to Roanoke, but we’re not counting them as official connections.)

4. Is this the end of an era? The fact that we’ve been waiting for the Apocalypse since Horror Story‘s first installment, coupled with the myriad connections being revealed, makes this season feel like the end of something. Could Apocalypse be a final chapter of sorts, with Season 9 launching a new, totally disconnected overall story? (Granted, I’m not exactly sure how this message would be conveyed, short of an “End of Book One” message like we got from The 100 last year.)

5. And why didn’t the Pope stop all of this?! In Season 1, Billie Dean Howard said that every new Pope is entrusted with “the ultimate secret,” revealing when and how the world will end, as well as “the precise nature of the Antichrist.” At the risk of questioning His Holiness, is there a particular reason why he chose to do absolutely nothing with that information?

Do you think you have an answer to any of these burning questions? And which of your own questions would you add to this list? Drop a comment with your thoughts on the impending Apocalypse finale below.