S— just got real on The Voice. In Monday’s jam-packed episode, all 24 members of Teams Blake Shelton, Jennifer Hudson, Kelly Clarkson and Adam Levine sang for a spot in the Top 12 — or, rather, the Top 13 since a contestant from The Comeback Stage (probably Lynnea Moorer) would also be winning a place in the lineup on Tuesday.

Prior to watching the performances, I imagined that the vocalists who’d advance would be (in alphabetical order): Dave Fenley, Natasia GreyCloud, Patrique Fortson, Sarah Grace, Kennedy Holmes, Kirk Jay, Kymberli Joye, Chris Kroeze, Michael Lee, RADHA, SandyRedd and Reagan Strange. But then, anyone’s guesses were as good as mine. After all, I never would have thought we’d be arriving at the Playoffs without Tyshawn Colquitt and Mikele Buck — and with Tyke James and Steve Memmolo. (Why, Adam? Why?!?)

So, which of the Top 24 justified my belief in them, and which of them gave performances that suggested I oughta get used to the feeling of egg on my face? Read on — we’ll go over their efforts, then you can vote for your favorite and hit the comments with your own Top 12 predictions. 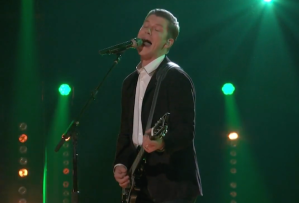 Michael Lee, “Every Time I Roll the Dice” — Grade: B- | From the first lines Michael rasped, it felt like he was sending a message: “Relax, folks — I got this.” But, though he looked and sounded right at home on stage, the song didn’t let him go as wild as I thought he needed to to guarantee a spot in the Top 12. He’d still get there, I imagined, but it wasn’t the slam dunk I was expecting from him.

Dave Fenley, “Angel Flying Too Close to the Ground” — Grade: C | Usually, I love it when Dave goes the softer, more earnest route. There’s a natural sincerity to him that really helps him sell that kind of number. Here, however, his performance kinda fell flat, only really coming to life as his vocal grew toward the end. Hate to say it, but he might be in trouble.

Natasia GreyCloud, “God Is a Woman” — Grade: C- | Poor song choice might have doomed Natasia here. She could sing the phone book and still make it sound pretty good. But “pretty good” wasn’t gonna get her to the finals. Why didn’t she go with something bluesier? It seemed to me that she didn’t sound like her badass self much until the dramatic, ad-libby bits near the end of her performance.

Chris Kroeze, “Have You Ever Seen the Rain?” — Grade: B | Finally, a good match of singer and song. Chris sounded so comfortable and just plain “right” on his Creedence Clearwater Revival cover that I’d be surprised if he hadn’t been performing it since he was old enough to hold a microphone. Not a showstopper, per se, but solid as hell.

Funsho, “How Long” — Grade: C | “Average” is the word that Funsho’s performance brought to mind. It wasn’t a disaster; now and then, he hit some really nice stretches; and there was one memorably big high note in there. However, occasionally questionable phrasing and an overall unimpressive vocal struck me as his ticket out of the competition.

Kirk Jay, “One More Day” — Grade: B- | After Kirk’s stunning, emotional performance in the Knockouts, I was really looking forward to hearing him again. This performance made me wonder why. It was OK, but it was no “In Case You Didn’t Know.” Still, it was polished enough — and I figured he had momentum enough behind him — to get him into the Top 12 without much trouble. 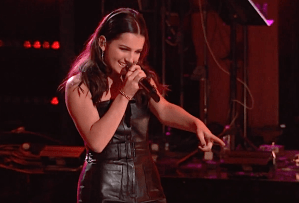 Abby Cates, “Next to Me” — Grade: D | From the outset, Abby’s youth and inexperience showed. She sounded shaky and a little pitchy, and didn’t seem to understand that if she bounced during her performance, it would negatively impact her vocal. Unfortunately, she didn’t get better as she went along, she just got pitchier. I was ready for her to be finished long before she actually was finished.

Keith Paluso, “Someone Like You” — Grade: D- | The park ranger is such a lovable fella, I hate to have hated his performance. Alas, I did. His Adele cover was as mumbly as Bob Dylan without Dylan’s genius to make up for it, and so pitchy, I almost wished the show was having its usual technical difficulties so that I could make an excuse for him. Yikes.

Sarah Grace, “When Something Is Wrong With My Baby” — Grade: A- | After those last two performances, I was especially relieved to get to Sarah. As she usually is, she was so. Freakin’. Polished. And despite her cut-print-that’s-a-record flawlessness, she also sounded genuine, like she meant every word she sang. Forget the Top 12, send her straight to the Final Four.

Zaxai, “When I Need You” — Grade: C | OK, I’ll admit that Zaxai hadn’t even finished singing the first line before I thought to myself, “Oh dear.” It didn’t turn out to be that bad, though. The song should be the main attraction in a grilled cheese, but Zaxai nonetheless happened upon a few lovely patches during his performance and unleashed the kind of falsetto that always seems to make the coaches go nuts.

Chevel Shepherd, “Grandpa (Tell Me ’Bout the Good Old Days)” — Grade: B- | There was something about the way that Chevel sang her first “grandpa” that made me think, “She’s got this.” And for the most part, she did. It wasn’t a performance that I’ll remember two weeks from now — will you? — but it was good enough to get the teen into the Top 12.

Kymberli Joye, “Radioactive” — Grade: B- | Hmm… another dubious song choice. Kymberli is a ridiculously powerful singer. However, Imagine Dragons’ hit didn’t play to her strengths. Yeah, she managed to turn up the volume high enough often enough that she should make the Top 12, but it seemed like work. A different number would have made this a much more effortlessly effective showcase for her. 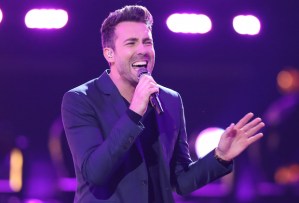 Steve Memmolo, “More Today Than Yesterday” — Grade: C | Everything about Steve reminds me of why I don’t go to karaoke bars. He seems like one of those guys who’s sure he’s a much better singer than he actually is. His vocal wasn’t horrible here — occasionally, it was even kinda pleasant — but the Ben Affleck look-alike himself? Sorry, just no. I can’t.

DeAndre Nico, “Ordinary People” — Grade: A- | Until Monday night, I’d been sorta take-him-or-leave-him about DeAndre. After Monday night? Decidedly “take him.” His performance went from intimate to powerful without missing a beat, and was actually so strong, it was more in line with what I’d expected us to get from Kirk Jay. (It even helped me forget the D-sasters on Team Kelly.)

RADHA, “Dusk Till Dawn” — Grade: C+ | Adam described this born belter’s voice as “nine feet tall.” And vividly remembering her roof-rattling Blind Audition, I’d agree with that assessment. Here, unfortunately, she only sounded about six feet tall (and a little pitchy here and there, too). I feared she’d put herself in danger of elimination.

Kameron Marlowe, “I Ain’t Livin’ Long Like This” — Grade: B | After Kameron’s iffy flirtation with reggae in the Knockouts, he returned to country-rock form for the Playoffs and sounded inarguably more in his element. Was it a thrilling performance? No, not really. But it was vocally solid, and considering that his competition included weak links like Steve and Tyke James, I couldn’t fathom him not sailing through to the Top 12.

Tyke James, “Use Somebody” — Grade: D | When Adam described Tyke’s voice as having “effortless soul,” I thought, “He should really put some effort in, then.” Here, he sounded as underwhelming and unfocused as ever. So maybe he was smart to have spent a few moments sitting close enough to the audience to let them get handsy — his only chance has to be a whole lotta viewers finding him hot.

Reagan Strange, “Worth It” — Grade: C- | Reagan’s appealing as hell and has a nice, big voice. Trouble is, in this instance, that nice, big voice was awfully pitchy and really undermined what could have been a fine performance. She seemed to know it, too — did you catch that look on her face as she finished? Will be interesting to see whether she or RADHA advance (since I’m assuming DeAndre and Kameron are locks). 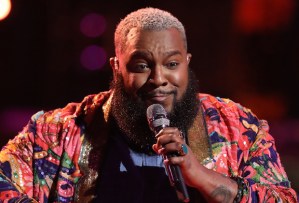 Patrique Fortson, “Ain’t Nobody” — Grade: B+ | Patrique started off sounding so strong that I was hardly distracted by his shimmering beard and amazing Technicolor dreamcoat. And he appeared to be having such a blast that it was hard not to get swept up in the fun. Vocally, it was a little off and on — one minute “wow,” the next “zzz.” But overall, good.

MaKenzie Thomas, “I Believe in You and Me” — Grade: A- | This was the polished, emotional performance that I think we’d always been looking for from MaKenzie. Definitely the best I’ve ever heard from the one-chair turn. (It even earned her JHud’s shoe.) But ironically, it also revealed MaKenzie’s limitations — when the song went big, her voice could only approach, not quite reach, the massiveness that would’ve been ideal.

Franc West, “Apologize” — Grade: B- | This guy is a performer to the marrow. I wasn’t a fan after the Blinds. But once I “got” him, I got him in a big way. So I was disappointed that I wasn’t blown away by his OneRepublic cover. He started out feeling it as much as singing it, and ended it singing with a disarming vulnerability. In between, though, it was kind of a mess, sloppy and more desperate than a vocalist as talented as he is should have to be.

SandyRedd, “No More Drama” — Grade: B | Don’t think we’ve ever heard the human hurricane sing with as much subtlety and restraint as she did at the start of her Mary J. Blige cover — and it was pretty cool. But the dynamo wisely built up big time as the song neared its dramatic conclusion, playing to her strengths as a vocal wrecking ball and, in the process, inspiring JHud’s second shoe-throw of the night.

Colton Smith, “Scared to Be Lonely” — Grade: C | Vying with his new ‘stache for attention, Colton started off pitchy and affected, then improved as he reached the number’s big, showoffy notes, which seem to be where he really lives and breathes. He even nailed a mammoth one toward the end that was as memorable as his sparkly jacket. Still, this was “Eh, all right” at best. Not as bad as some Monday but not good enough, either.

Kennedy Holmes, “Halo” — Grade: B | I don’t think it was a coincidence that the show saved Kennedy for last — she’s probably Season 15’s best (and definitely a safe bet for Final Four, never mind Top 12). This wasn’t her finest performance — she moved around more than was conducive to an impeccable vocal and was a little pitchy on the big note that was meant to bring down the house. But her talent and promise remained undeniable. She’ll go far.

So, who surprised you Monday — in a good or bad way? And how does your Top 12 wish list compare to the Top 12 that you think will be voted through? Pick a favorite in the poll below, then hit the comments.