This week on The CW’s Arrow, Oliver allied with a dead person (!) in his bid to survive Level Two, while Team Felicity (the name is being workshopped) made its own contribution to the effort.

Earmarked for “Phase 2” of Level Two, Oliver is outfitted with a cuff that subjects him to electrocution if he misbehaves. “You belong to me now,” says the bull in charge, warning that Inmate 4587 is about to head “down the rabbit hole.” That night, Oliver is awoken by an intruder in his cell: Talia al Ghul, who landed in Slabside after “running afoul of an old foe in Gotham.” It turns out that she survived the Lian Yu explosion, in great part thanks to some drug that Ricardo Diaz hooked her up with. 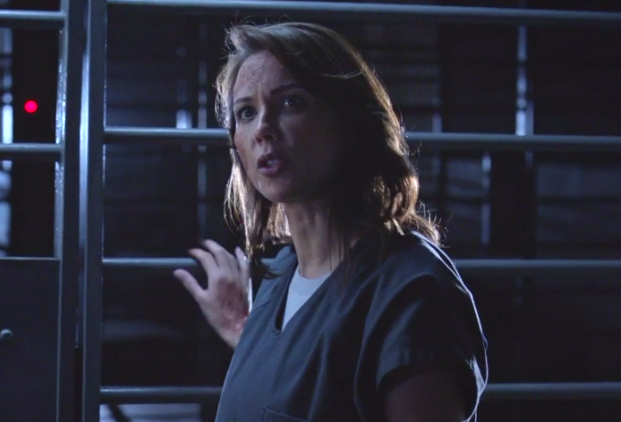 Talia wants Oliver’s help in escaping, saying that they can “stand on the same side” as they once did long ago — but he reminds her of just how much treachery at Adrian Chase’s hand she supported. So Oliver orders her out of his cell. The next day, Inmate 4587 feels out Parker about his experiments in the ominous “blue room,” and the not-good doctor says that just as they removed the part of Oliver that was stuck in a cycle of violence, imagine if they could do that for the others! (But based on what Oliver has spied, the results so far are… fatal.)

Oliver agrees to Talia’s escape plan, if she in turns helps him expose truth about Parker. The first step involves KOing a guard, after which Talia “betrays” Oliver by getting into a scuffle with him. Zapped unconscious by arriving guards, they are both dragged to the blue room, where Parker is poised to experiment on them. Inmate 4587, though, interrupts the doc’s psychobabble to announce, “My name is Oliver Queen!” and then kick all the ass in the room.

There’s much more fight ahead for Oliver and Talia, as they face off against — and lay waste to — a dozen or so corrections officers on their way to the morgue exit.  There, Oliver hands Talia the flash drive with the damning files he copied off Parker’s computer, asking that she deliver it to Felicity. After all, if he escapes now with Talia, he’ll be a fugitive the rest of his life, and that’s no way for he and his family to live. Oliver fends off, for a moment at least, the arriving guards, while Talia escapes out an airshaft. Following his beating, and with Level Two now shut down, Oliver is returned to his ordinary cell, where Stan delivers a message from Felicity (who attempted a visitation): She’s got a lead in Diaz.

Felicity’s lead, of course, is the tracker that she planted on Silencer before letting the Longbow Hunter “escape” her and Rene’s clutches. Her and Laurel’s monitoring of the tracker gets interrupted by Felicity’s discovery about Oliver being sent to the mysterious Level Two. Digging through the SCPD’s dusty, analog file room, Felicity, Laurel and Dinah learn that Dr. Parker has been the subject of malpractice suits, including one where he turned someone’s kid docile. At episode’s end, once Talia covertly slips the flash drive of Parker’s files to Felicity, the ladies plot how best to use it, beyond putting the shrink in the hoosegow. Maybe they could use it to get Oliver out of prison? That idea is interrupted by a tracker alert, as we see Silencer arrive in Moscow, where Diaz seems about to silence Anatoly, forever.

Elsewhere in the episode, ARGUS tasked Curtis with posing as a chemical weapons whiz, in the name of catching a major trafficker. Despite some close calls (and Curtis nearly bailing on the second part of the undercover op), he and Diggle pulled it off. Afterward, Curtis revealed something curious he found in the course of combing through the intel stolen from the bank last episode: an image of a 19th Century painting…. (Did my ellipse there make that development sound at all interesting?)

What did you think of the episode “The Demon”?