The Last Ship wraps its final, world-saving mission this Sunday at 9/8c, as the TNT action-drama ends its five-season run. Already, significant losses have been suffered — Garnett and Burk included — and more are still to come, with the Navy and Marines about to storm a soft spot in Tavo’s Colombian defenses, all while the Nathan James at least attempts to outwit its adversary at sea.

Adam Baldwin, who plays Admiral Mike Slattery, shared with TVLine a spoiler-free peek at the highly emotional nadir ahead, while also reflecting on The Last Ship‘s impressive run — and its place within his career.

TVLINE | I have to say, it’s pretty damn fantastic as series finales go.
Do you think [MAJOR SPOILER REDACTED] was appropriate? Or was it like, “Oh no, that’s a s–tty way to end it”?

TVLINE | I think it was appropriate.
Yeah…. When we were filming that sequence, as actors I appreciate that I’m just one in a costume, while the folks that we work with in the Navy are actually wearing authentic uniforms. But in the actor’s mind, you’re thinking, “Well, the show is over.” And while we were filming, they were striking the set, so we all had inner monologues of, “Oh man, I’m not going to see these people again.”

TVLINE | As I watched the first 10 minutes of the finale, I was thinking, “Oh… I guess almost all of the action will be on land.” And then boom! You realize that Slattery and Chandler and Kara will be as in the thick of it as anybody else.
I think it was a masterful job that the writers and the showrunners put together, weaving the land and the sea and the air together. It’s such a complex meld, and they did yeoman’s work, as it were. I had a blast, it was one of the greatest working experiences of my life.

TVLINE | As the series wound down with these last episodes, were you surprised at all by how tangible the casualties were?
Oh yeah. These were friendships that you build over time, as far as the story arc goes. Good writing for an ensemble cast is tricky, because how do you serve the characters, how do you give them an arc even if they’re in one or two scenes? I think they did a very good job of allowing someone who’s just got one little bit to have gravitas throughout that scene. So when they are lost, it means something.

TVLINE | What emotions do you think viewers will be going through Sunday night as they watch this?
Hopefully they’ll have remorse for the lost, and hope for the future. I think they’ll see that the characters were able to bring, as they say in the Navy, “honor, courage and commitment” to the story. It’s bittersweet. It’s sad. But it’s hopeful at the end, because the Nathan James served her purpose. We saved the world. 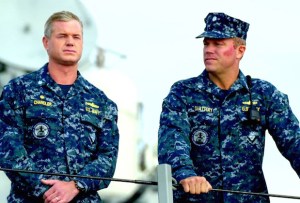 TVLINE | A lot! Like Buffy’s tombstone. Across all that you’ve done in your career, what did this experience mean to you?
Just about 40 years I’ve been doing this, since 1979, and I have milestones: My Bodyguard is one. And Full Metal Jacket is one. Firefly and Serenity is another, and Chuck, and this. This is one of the most important professional experiences of my life, just because of the scale and the scope of it. We had actual Navy ships that we got to ride aboard; I got to ride on the USS Oak Hill up through New York harbor during Fleet Week, where I got to meet airmen and soldiers and Marines that come in and out of there. We screened the show aboard the ship — where we got heckled by nitpickers! “Awww, that’s not how it goes!” [Laugh] We tried to be authentic as possible, but…. So, it’s tops, right up there. Full Metal Jacket or this one…? They’re of similar weight in my life.

TVLINE | I think there’s something to be said for shows that speak to military might. Personally, I’m going through this phase watching SEAL Team, History’s SIX last year, and obviously The Last Ship…. There’s something visceral about watching American muscle get flexed.
Full Metal Jacket, for instance, and The Last Ship and SEAL Team, they portray military personnel as human beings. They’re not necessarily pro-war. I know a lot of military personnel, and they hate war. War sucks, it’s hell. But you humanize these guys on-screen. You can be anti-war and pro-soldier; it’s a good thing. These guys volunteered to serve their country and you have to give them nothing but respect, in my mind. 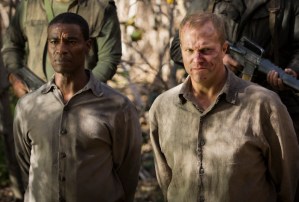 TVLINE | Do you have a favorite season of The Last Ship? Was this it?
It’s right up there. Season 2 was great, too, because we were getting up on our feet. There was also a complexity to filming that season; we were jumping back and forth, doing Episode 2 and Episode 7 [simultaneously], because we were tied to location. The ADs were going nuts! I also really enjoyed the flashbacks I was able to do with my family [in Season 4], and I liked the prison camp season [3] where I got to get out of uniform and get beat up and get bloody. That’s kind of my wheelhouse. [Laughs] I’m OK standing there giving orders, but I like getting my private parts in the dirt and rolling around and getting scraped up. When I get home and don’t have any bruises, my wife’s like, “You didn’t even work hard today.”

TVLINE | What’s next for you?
I did a couple of jobs after we wrapped [a year ago]. One is The Kid, which is a Western that [Vincent] D’Onofrio directed; that was fun. And I did a thing called The Legend of 5 Mile Cave, which is a beautiful family Western; I get to ride some horses. Right now, we’ve got to find something else. We’re gypsies, were circus players! I’m a character actor looking for a character role. The last 15 years have been pretty good, so I’m trying to pick one that will get another five-year run, and maybe I’ll hit the golf course forever after that.

TVLINE | Lastly, I must ask: Which do you think we might ever see more of, Chuck or Firefly?
Oh, wow. I don’t know. Pure speculation, I’d have to guess that Chuck would be the one, because of Zachy’s, Zach Levi’s driving force. Firefly is really up to Joss [Whedon] — if he even wants to do it. At Comic-Con 2012 ,we had the 10-year anniversary and he said, “I don’t know if I want to revisit it. It’s kind of perfect the way it sits there.” He said he’d be worried about screwing it up, which would be the risk when there are such high expectations. I’ve always said I’d never want to be a 60-year-old Jayne Cobb. [Laughs] That ain’t gonna happen!