On this Sunday’s God Friended Me, Miles isn’t the only one with family drama. While he’s directed by the Almighty’s Facebook account to help his uncle, Cara gets an unexpected visitor in the form of her dad (played by Alias vet Michael Vartan).

“He sort of shows up without any mention,” even though he and Cara are “really close,” co-star Violett Beane previews. The pair’s bond was cemented when Cara’s mom abandoned the family, leaving her husband to raise their young daughter on his own. The incident “brought them closer together. They [have a] always-told-each-other-everything type of relationship,” Beane says.

Well, they used to tell each other everything. Dad only discovers that his reporter daughter and her mother have reconnected “because he’s read her stories,” Beane shares. Despite the surprise of it, “he’s OK” with their reunion, as seen in TVLine’s exclusive sneak peek — that is, “until Cara’s mom decides to bring up” a touchy subject over a Bloom family lunch. 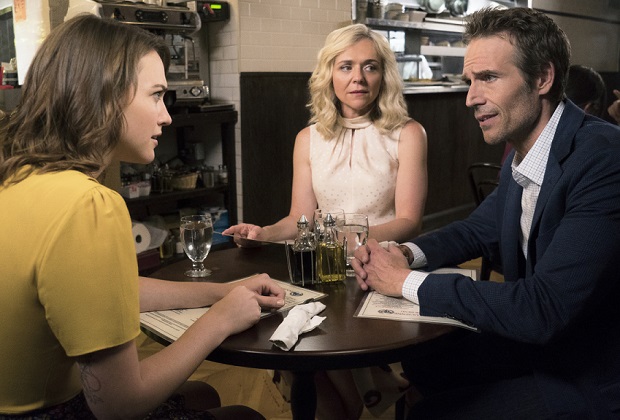 “Her dad knew something that [Cara] feels he should have told her, but that he didn’t,” Beane teases. “That’s kind of where the schism happens. She gets in a fight with both of her parents over it.”

In the midst of the familial crisis, “you see the little kid that Cara was, because you see a different aspect of her,” Beane notes. “You see her around parents rather than around friends.”

Speaking of friends (who might be something more), Beane acknowledges that there’s a “deeper connection” between Cara and Miles, “but it can be scary. Maybe the two aren’t ready for that.” In the meantime, Cara has reconnected with her ex Eli (guest star Kyle Harris), even though “there’s a chance they might both be in different places in their life,” and the relationship redo “maybe isn’t what they expected.”

Press PLAY above to watch the preview, then hit the comments with your thoughts. And a reminder: God Friended Me airs Sunday at 8:30 pm ET/8 pm PT on CBS.