Wednesday’s penultimate episode of American Horror Story: Apocalypse wasn’t just illuminating — it was Illuminati-ing. That’s right, folks, the “Cooperative” as we’ve come to know it is merely a “code name” for the freaking Illuminati, whose members apparently include Vladimir Putin, Warren Buffet and Bill Clinton… but definitely not Beyoncé. (Y’all haters corny with that mess.) And since all of the organization’s members have sold their souls to the Devil, they’re basically Michael’s loyal subjects by default. (Or as Billy Eichner’s mop-topped Mutt explained it, “Daddy set you up, bro!”)

But first things first: Before he could bring about the apocalypse, Michael needed — or at least wanted — to rid himself of those pesky witches, which he did. And brutally, might I add. With Dinah’s help, Michael and Mead broke through Cordelia’s protection spell and gunned down nearly everyone at Miss Robichaux’s Academy for Exceptional Young Ladies, save for Cordelia, Myrtle and Mallory. The trio barely managed escaped to Misty’s cozy swamp shack, where they rendezvoused with Madison and Coco. (You know, just in case any of the survivors were curious about the gluten content of their next meal.)

The sudden massacre of her sisters inspired Madison to (finally!) reveal what she learned at the Murder House, that Michael possesses the ability to destroy souls, which explains why Cordelia wasn’t able to revive them. This apparently left the coven with but one option: time travel! Myrtle hypothesized that, given Mallory’s ability to heal animals and reverse their aging process, she should also possess the ability to send her consciousness back in time. And what do you know, she did it! 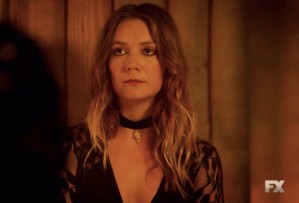 The “dry run” to test Mallory’s abilities sent her back to 1918 Siberia, the night the Romanoff family was slaughtered by the Bolsheviks. And in a very Once Upon a Time-esque twist, it was revealed that Grand Duchess Anastasia — she of the animated musical masterpiece — was actually a witch. Her own abilities weren’t strong enough to save her family, but she was almost able to do it with Mallory’s help. (I said almost. When the poor witch finally regained consciousness in Misty’s bathroom, she was literally bleeding out of her eyes.)

Speaking of unsettling imagery, the episode ended with Michael claiming his authority over the Collective, then laying out his entire plan for the apocalypse, the Outposts, etc. (Frankly, I would have appreciated a nice PowerPoint presentation, but who am I to tell the Antichrist how to end the world, right?) And since Jeff and Mutt had their hand in all of this, they also got Venable a plum spot in the whole operation, which means we’re just a few earth-shattering missiles away from being back to the season premiere — and not a moment too soon, considering there’s only one episode left.

* I’m glad they finally explained Dinah’s connection to Michael, specifically that her talk show was a reward for helping him slaughter the other witches. I’ve been wondering about those two ever since their apparent reunion in the bowels of Outpost 3 earlier this season.

* Of all the Mallory theories we’ve collectively cooked up this season, have any of yours included elements of time travel? Mine sure haven’t.

Your thoughts on this week’s AHS: Apocalypse? Hopes and predictions for the season finale? Drop ’em all in a comment below.