The following article contains spoilers for the Season 1 finale of Mayans MC.

EZ Reyes had a chance to, quite literally, ride off into the sunset on Tuesday’s season finale of Mayans MC — but when the opportunity arose, he just couldn’t take it.

Episode 10 of the FX drama was a major one for J.D. Pardo’s protagonist, who was tasked with killing DEA agent Kevin Jimenez in order to get his name cleared and move on with his post-Mayans life. Despite multiple pleas from their father not to kill Kevin (and avoid becoming monsters at the hands of Lincoln Potter), EZ and Angel did go through with murdering the agent. Larry Bowen, Kevin’s colleague at the DEA, was also caught in the crossfire and killed.

Pleased that EZ had held up his end of the bargain, Potter made good on his part of the deal, as well: He made a quick and cryptic phone call to the DEA, and just like that, all of the agency’s files on EZ were wiped as though they never existed at all. EZ was handed the chance to walk away from the Mayans and get back to his pre-prison lifestyle; even Angel, who was still furious about EZ’s deal with the DEA, knew it was the right thing for EZ to put the motorcycle club in his past for good.

EZ, however, came up with a different plan. Instead of turning in his cut, he went to Bishop and asked the chapter president to be his sponsor within the club instead of Angel. “I don’t know who the f—k I am anymore, Angel,” EZ told his brother, who wasn’t pleased to learn that EZ was staying in the club, after all. “But I know I’m not supposed to run. So I’m not going anywhere.”

Unfortunately, EZ’s optimism was short-lived. At the end of the episode, the Mayans were joined by a few SAMCRO members, including Sons of Anarchy character Happy Lowman, who will be supplying the Galindo cartel with guns. All of the Mayans were thrilled to see Happy and his SAMCRO crew, except for EZ. As we learned via flashback in the finale’s closing moments, Happy is the man that EZ was chasing on the night he murdered that cop — and he could very well be the man that killed EZ’s mother eight years ago.

TVLine caught up with Pardo to discuss the finale’s biggest moments, including EZ’s decision to stay put with the Mayans. Read on for his insights into the episode. 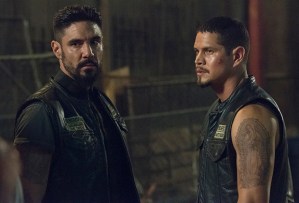 TVLINE | The opportunity to leave the Mayans and get on with his life is presented to EZ on a silver platter in this finale. Why do you think he decides to stay, despite the relief of seeing the DEA’s files on him get wiped?
I think what drives him is what he says to Angel. When I was inside [prison], it was about me and trying to get my life back. But since I’ve been outside, it’s been about [Angel] and Felipe and Emily and the club. It’s a moment where EZ is starting to get comfortable with the fact that things happen for a reason and he’s exactly where he’s supposed to be. He’s just not going to run. It’s survival now. It’s like prison. He’s going to stand up, right where he’s at, and he’s earned the right to be there. That’s at the heart of it, but then it gets complicated with emotions. He does love his brother, and he gets a brotherhood with the club. EZ really became a loner during prison and after prison, so it’s nice to have a brotherhood.

TVLINE | You just reminded me of the conversation that EZ and Coco had a few episodes back, when Coco says that everything ultimately happens for a reason, and your mistakes put you where you need to be in life. Did that conversation contribute to EZ’s decision to stay with the club?
I actually thanked [the writers] for that scene. EZ’s very locked up. Coming out of prison, he’s a locked-up soul, he’s a shell of himself. He’s hit rock bottom, and he’s trying to get out, right? He’s looking for freedom. But I can’t just do it as an actor; it’s got to be in the writing. It’s got to be there. So when I saw that scene, I thanked them, because it planted that seed. The only seed that EZ needed, since he’s such a cerebral person, is to just think that all of those things were meant to happen for a reason. That you actually weren’t supposed to have that life that you thought you were supposed to have. That, right there, starts opening him up, and he starts being aware of where he’s at today. It’s a beautiful scene, and there will be a lot of growth just from that one scene.

TVLINE | EZ also has an ominous moment with Potter in this finale, where Potter essentially tells EZ that he’s going to cash in another favor down the road, since EZ and Angel killed two people instead of one. Did that warning factor into EZ’s decision to stay with the club? Will it be easier to have the Mayans on his side if Potter comes calling?
You know, I didn’t think of it that way, but now that you bring it up, that is absolutely a possibility. I’ve never looked at it that way before, wow. You’re right. EZ is a smart dude, and he’s about surviving. When you add it all together, which way is probably the easiest way to survive with Potter? And that is maybe with the support of the brotherhood. It could be all of those things. [Ray McKinnon, who plays Potter] is amazing. He’s so creative. I love and hate having him at the same time. [Laughs]

TVLINE | Where would you say EZ stands with Angel by the end of this finale?
What EZ’s starting to learn is that there will always be that love between family. In that moment, he lets Angel know that he’s not going to be controlled so much and pushed around like that. He doesn’t say those words, but EZ is going to start taking control of his own life. He’s going to start living his life for himself. At that point, it’s like, “If you’re going to blow me up, blow me up. If you’re going to rat me out, rat me out.” He’s become a survivor. His relationship with his brother is so complicated because they do love each other, but they’re also human beings, right? It gets complicated when you have those emotions. But in their journey together, the older brother has done stuff to put the younger brother’s life at risk. EZ’s never looked at it that way before, but now he sees it. Now he recognizes it. And that makes it even more complicated.

TVLINE | I covered Sons of Anarchy‘s final season when it aired, so I was excited to see Happy come back. Did you already know that Happy could be involved in killing EZ’s mom, or did you find that out when you got the finale script?
I found that out as we were shooting. I was so excited, so excited. They just lift us up so much, the guys from Sons of Anarchy — Chucky and Happy and Gemma in the first episode. It is so great to have them be a part of it. We’re definitely trying to create our own show with Mayans, but we wouldn’t be here without Sons of Anarchy, so to honor them in that way is just so cool.

What did you think of the Mayans finale? Cast your votes in our polls below, then hit the comments with your thoughts on Tuesday’s episode.