This Tuesday, while you’re waiting for Election Night results to trickle in, The Gifted (Fox, 8/7c) not only serves up a new episode but one that promises to shed much light on the Frosts’ chilling backstory.

“It was a big episode,” avows series regular Skyler Samuels, who with the help of stand-ins Amber Erwin and Rebecca Ray brings the Frosts to life. “It was like our biggest triplet challenge yet.”

Here, Samuels elaborates on the “awkward situation” that a headstrong Lorna puts Esme in this week, and the big reveals that come out of the pair’s gradual bonding. Plus, a handy guide to telling Esme apart from Sophie and Phoebe! 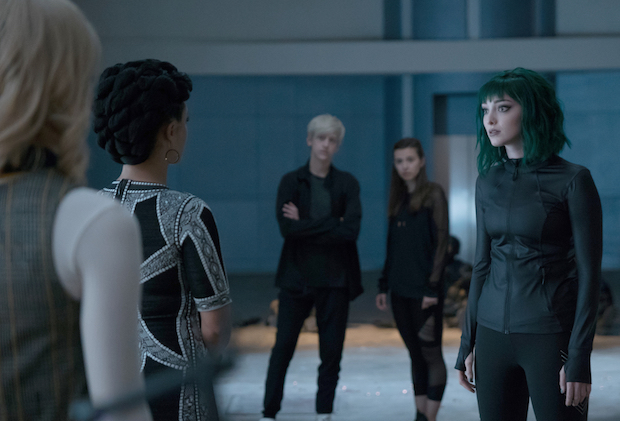 TVLINE | This week, I understand, the Inner Circle is bracing for an ambush — and Esme needs to get Polaris on board?
At this point in the season, both Polaris and Andy have been sort of kept in the dark by Reeva and the Frosts. The Inner Circle is on a need-to-know basis, and how loyal and long you’ve been around determines how much you get to know. And while Andy and Lorna are both very valuable to us, it’s important that they’re not overwhelmed by too much information, too soon. But in this week’s episode, Lorna is getting really antsy. She’s basically like, “I am not showing up or putting my power to anything until somebody gives me a goddamn explanation.” She puts Esme in a bit of an awkward position, and Esme goes behind Reeva’s back and shares something in confidence with Lorna to help get her on board for the big mission, which will happen next week. And that sort of opens Lorna’s eyes to what exactly she’s doing in the Inner Circle.

Up until this point, there’s been a bit of ambiguity — like, we’re here for this big purpose of “creating a mutant homeland,” but it seems like there’s something more imminent than just that. And what’s currently brewing around them isn’t made clear until the end of this episode. And then next week’s episode, man, is just phenomenal. So, Esme’s “trick” with Lorna in this episode brings them closer. Esme shares something with Lorna that she hasn’t shared with anybody before.

TVLINE | Were you surprised by anything in the Frosts’ backstory, which we learn about this week?
Obviously, in any story ever, a villainous character isn’t born a villain. We’re not born hating. We’re not born with prejudice. That’s a nurtured thing, you know? And obviously the Frosts have made some questionable choices in their past. I think they do fight for what they believe, and they are invested in making the world a safer place for mutants, but sometimes the means by which they achieve these things are morally ambiguous… and more times than not lean towards unethical. What we learn this week is that, from an early age, they really were nurtured to manipulate — but I don’t think I even realized the extent of just how incredibly frightening, tragic, and traumatic their upbringing was. It sheds a lot of light on how they’ve ended up where they are today and how they operate, both within the Inner Circle and with each other.

Something I really enjoy about this episode is we see quite a bit of alone time with the sisters. There’s a scene where we’re getting dressed in our fabulous room, with our fabulous walk-in closet—

TVLINE | Talk about a three-way mirror!
[Laughs] It is a three-way mirror, but even more so it’s one of those quiet moments where we’re in our pajamas and you can see Phoebe and Sophie ragging on Esme, like sisters do. They really behave like family, which is that you love each other, but you don’t always like each other. 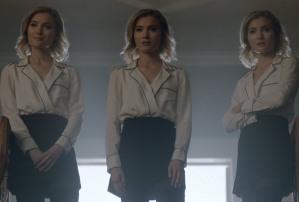 TVLINE | Do you have a cheat sheet for us on which one is which whenever we’re looking at the three of them?
So, the sort of rule of thumb — or thumbs  — is that Sophie has a slightly higher pitch; we kind of joke that it’s the “creepy baby voice.” She also tends to stand with her left hand over her right wrist in front of her. Phoebe tends to talk in a lower register, and she’s got more sass and bite when she talks. She usually has a hand on her hip, or arms crossed. She’s full of piss and vinegar, like, she’s ready to push buttons at any moment in time. And Esme is sort of our straight shooter. She has my natural speaking voice and she tends to stand with her arms down.

TVLINE | And when it’s a three-shot, is it always Esme in the center…?
Not necessarily. I think that at a point that was the case, but what I love about the Frost sisters is their dynamic is very geometric. When we first meet the Frost sisters in Season 1 and even at the beginning of Season 2, there was sort of hardcore triangle formation, with Esme at the point of that triangle, but what’s interesting is the shape starts to change. As the season goes on, we start to see the other sisters come into roles of power and maybe sort of overtake Esme in certain moments. 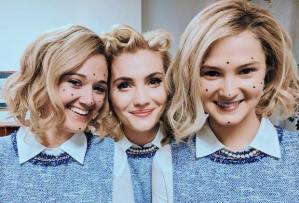 TVLINE | You, Amber and Rebecca have done wonders with the triplet scenes. But is there anything that’s still hard for you?
Usually I’m able to read with both of them in real time and look at them, and then we’ll switch spots. That way, I’m able to actually look into their eyes and speak with them like I would any other actor on the show. But sometimes, for technical reasons, they can’t be in place, so I have to be there alone, and it’s always hard to sort of imagine where exactly they are. I’m like, “Is that where she was…? Does that eye-line make sense…?” I use my imagination more on this job than any that has come before, but also in a very different way. So, that’s still tricky.

TVLINE | Have you had any exes text you to joke, “Damn, if I knew there were three of you…”?
Oh God — I think one of me could be a lot! Three of me, they’d have run from the start. Actually, no, that makes me sound crazy. [Laughs] I will say that my parents had the best response. My dad had just caught up watching the show, and he and my mom were both like, “We love you, and don’t take this the wrong way, but thank God there’s only one of you, because three of you would’ve been a goddamn handful! I don’t think we could’ve done that.” My dad was also like, “Sometimes I recognized my daughter Skyler, but then there was these qualities coming out of the other two where I was like, ‘I don’t know that person. I sort of forgot that I was watching you.'”

TVLINE | That’s got to make you feel good as an actress.
Absolutely. Mom and Dad are, of course, my biggest fans, and nobody knows me better, so to have them momentarily forget that they were looking at me, I was like, “You know what? I think that’s the best piece of feedback of my work I’ve ever gotten, on anything, ever.” It doesn’t get higher than Mom and Dad’s seal of approval.

Watch an exclusive sneak peek from this week’s The Gifted: