Still suffering from kryptonite poisoning, Kara had one job on Sunday’s Supergirl: to stay behind and let her fellow DEO agents handle the city’s growing anti-alien terrorism problem. Thank Rao she failed.

Sunday’s episode also introduced us to Fiona’s fiancé Manchester Black, a well-dressed badass with a cheeky sense of humor. (Upon seeing Kara pass by in her new suit, he asked, “Was that Supergirl, or one of the blokes from Daft Punk?”) Manchester teamed up with J’onn to track down Fiona, but various mental roadblocks prevented the Martian from zeroing in on her location.

Naturally, the solution to Hank’s problem came via a heart-to-heart with his former protege. “Wisdom literally emanates from you,” Alex told her self-doubting mentor. “You are exactly who your father thought you would be.” This earned Alex one of Hank’s classic fortune cookie proverbs (“Trust your gut and you will soar”), which inspired her to step up and do what needed to be done as the leader of the DEO.

That plan involved defying the president’s orders — because this is The CW, where we DARE TO DEFY — and letting Supergirl loose in National City, despite the potentially lethal air quality. And although things got a little dicey for a bit, Brainy and Lena managed to purify the air in enough time for Kara to apprehend Otis and Mercy Graves. Alex was met with applause upon her return to the DEO, but the president wasn’t quite as congratulatory (surprise!), assigning Colonel Hayley to step in and personally oversee things moving forward.

Speaking of skewed perspectives, Guardian’s return to the streets went viral, though not in the way James anticipated. As Nia pointed out, stories about Guardian fighting aliens are popping up on an alt-right “news” site (think Earth-38’s Breitbart), written by none other than Ben Lockwood — aka Agent Liberty.

We should also probably discuss that brief scene we got with the “Red Daughter” in the episode’s final moments. Following the success of Brainy and Lena’s plan to purify the air, the other Kara was also able to step outside and survive the atmosphere — but what exactly is she “training” for? Should we be worried? Or just excited? 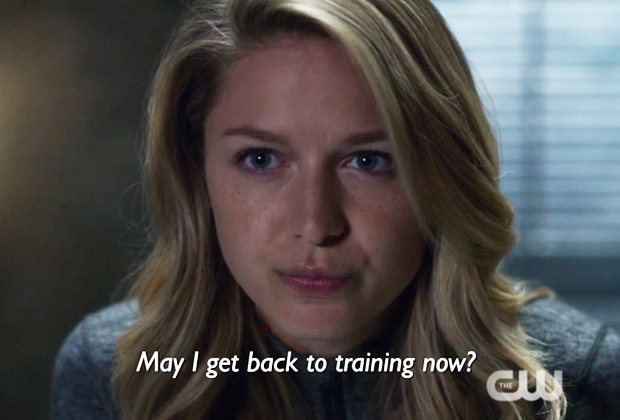 Sadly, this week’s episode didn’t end happily for all parties involved. Manchester was thrilled to be reunited with Fiona during Supergirl’s skirmish with the Graves, but his relief turned to devastation as he watched the life leave her body. (But, hey, at least we got a Beebo sighting this week, right?)

Your thoughts on this week’s Supergirl? Drop ’em in a comment below.