Warning: This post contains major spoilers for all ten Season 1 episodes of Amazon’s Homecoming. Consider everything that follows “classified.”

Heidi hit the road to make up for her past mistakes in the Season 1 finale of Amazon’s conspiracy thriller Homecoming — but was she already too late? We need to talk about that ending, so let’s press record and start this therapy session, shall we?

First, a quick recap of the season thus far: We met Julia Roberts’ Heidi as a counselor at the Homecoming facility, seemingly set up to help rehabilitate soldiers returning home from war. But thanks to a dogged Department of Defense investigator, we learned that Heidi’s facility was actually drugging the soldiers so they’d forget their battlefield traumas and the military could quickly send them back for another tour of duty. Heidi’s own memory was fuzzy, too, after she and her favorite client Walter scarfed down a plate of heavily medicated cafeteria gnocchi in the penultimate episode. 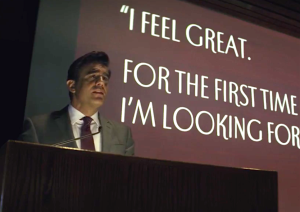 The finale opens with Colin boasting about Homecoming’s achievements to a room full of military brass, citing one participant’s incredible recovery: “He is cured… he wants to get back to work.” He’s interrupted, though, by frantic texts from Craig about Heidi’s cafeteria stunt. She’s destroying tapes of her sessions (while saving a few to mail to Walter’s mom) when an irate Colin calls, demanding to know what she’s up to. She calls him “hysterical” — ha! — before admitting she wanted Walter to overdose on the meds so they wouldn’t be able to deploy him again. (“Are you insane?” Colin asks. “It’s possible,” she concedes.) He threatens to come down there, but she’s already boxed up her things and headed out the door.

Things get worse for Colin when Geist receptionist Audrey (played by Hong Chau) calls him into a meeting and starts peppering him with questions about why he went to the former Homecoming site with Heidi. He patronizingly tells her he’ll wait for his boss Ron, but she says, “He’s not with us anymore,” adding, “I’m in a new role.” They agree that they need to pin this mess on “a rogue employee”… but Colin doesn’t realize she means him. “You were a problem solver, but now you are a problem,” she informs him while handing him a pre-written admission of guilt to sign. Ciao, Colin.

We learn that Craig doctored the Homecoming records to add a phony “misconduct/violence” charge to Walter’s file, while the soldier was left nearly catatonic by his med overdose. Back in the present, Heidi tracks down Walter’s mom Gloria and tells her the whole, ugly truth about Homecoming: They targeted soldiers who had PTSD issues and medicated them to “delete” problematic memories. Gloria isn’t impressed: “I understand what you did… I don’t forgive you.” “I understand,” Heidi replies. She still thinks she could use a special object from Walter’s past to trigger the return of his memories, but Gloria says no. He’s finally happy, she says, before ordering Heidi to stay away from him. 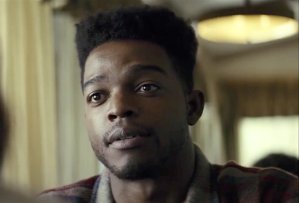 Heidi doesn’t listen, though: She sets off on a cross-country road trip to the California mountain town of Fish Camp, where she and Walter talked about driving to, with the road map he gave her in hand. And there, hammering away at a porch outside a cabin in the woods, is Walter! When he casually walks into the diner where she’s eating, she stares at him, dumbfounded. He doesn’t remember her, of course, but he’s friendly, and they make polite conversation as she pretends she doesn’t know him — and hides the road map from his sight. “I was supposed to meet someone,” she tells him, deep sadness in her eyes… but “I was late.” She keeps the road map out of sight and wishes him luck as he walks out, choking back tears as he leaves. But when she looks down, she notices he repositioned a fork on the table — just like he did with the pen on her desk at Homecoming. So the old Walter is still in there after all.

But wait, there’s more! If you watch director Sam Esmail’s other TV show Mr. Robot, you won’t be surprised that he tacked on a post-credits scene here. In it, Colin insists he’s being a “team player” as he signs the form that Audrey put in front of him. After he leaves, Audrey starts visibly trembling and reaches into her purse for a vial of red liquid marked “LAB USE ONLY.” She rubs the liquid on her wrists… and suddenly, she’s calm again. Is everyone connected to Geist on experimental meds, or what?!

A few lingering questions we still have after that bittersweet ending, and a terrific season:

* What happened with Carrasco’s investigation? We know it got elevated, but are we to assume it just fizzled out in a sea of bureaucracy after that?

* Were you expecting Dermot Mulroney’s character to pop back up again, since it’s strange that he would play such a small and insignificant role in the story?

* What will Season 2 look like? (Amazon ordered two seasons from the start.) Here’s hoping it’s a totally new story, maybe even with Julia Roberts playing a new role, American Horror Story-style. Heidi and Walter’s story has already been told… and told very well.

Now it’s your turn: Grade the Homecoming finale, and Season 1 as a whole, in our polls, and then hit the comments to share your thoughts — and your own lingering questions.