As a rule, I aim to outright avoid — and certainly don’t get caught up in — fan speculation about the shows on my “beat” /that I cover. Alas, I stumbled across a particular Arrow Season 7 theory, and it did get my wheels churning….

The funny thing about what I do here at TVLine is that because part of my job is to interview producers and actors in the name of properly previewing episodes/shows, I need to choose my battles if I am to experience any surprises as a viewer. That’s why I don’t go out of my way to seek out theories; I mean, I literally have no idea how to “do” Reddit. None.

But shortly after Arrow‘s season premiere aired, and we glimpsed the new bow-toting vigilante that has Dinah, Rene et al puzzled, I accidentally saw a commenter relay a theory that has since only gained momentum. And it admittedly got my own bean thinking. So if you, like me, are averse to speculation that might prove to be an actual spoiler down the road, the time to hit the Back button is now. 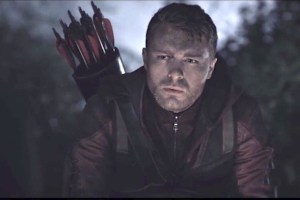 Who is this new Green Arrow lurking in Star City’s shadows? The finale raised that question, and then in its final minutes revealed that an unidentified young man who had chartered a fishing boat was on his way to Lian Yu. There, he drew the attention of someone else on the island — an older Roy Harper, and we eventually realized that these scenes were set 20 years into the future. And that the young man was a grown William.

Some and then many, especially given the developments in Episode 2 (Felicity led grown-up William to dig up his father’s bow?), speculated that Oliver’s own son is the new Green Arrow back in 2018. But if you subscribe to that theory, it means that some form of time travel was involved, to send William — after he is well-trained by Roy — into the past to uphold his incarcerated dad’s legacy.

(Now, showrunner Beth Schwartz noted at a screening of the premiere that Arrow is “sticking to grounded storytelling” — though, full context alert, that was in the course of dismissing the suggestion that this season’s flash forwards depict a future that characters in the past will attempt to avoid/change.)

The time travel aspect is what loses me a bit, frankly, seeing as Roy isn’t the first person I think of as having Sara Lance on speed dial. But once he and William trek back to Star City, who knows who they’ll find there. So, let’s allow that time travel of some sort will transport a grown, trained and suited-up William to 2018. 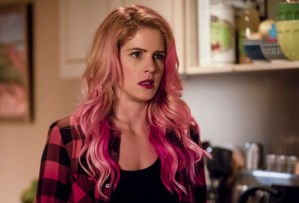 This is where I add my two cents: Felicity knows that William is the new Green Arrow.

I base that on two things. For one, I found it awfully conspicuous that the season opener didn’t show Felicity being saved from Diaz’s attack in her WITSEC apartment. She later claimed that ARGUS arrived in the nick of time, but what if it was actually the new Green Arrow who intervened? After Diaz skedaddled, grown-up William revealed his identity and agenda to his stepmom. Then after that, ARGUS showed up.

Felicity being clued into the new Green Arrow’s identity leads to the second basis for my theory: her haste to get teenage William out of town, to a boarding school. Felicity surely has seen Back to the Future, so she may have done this to ensure that the two Williams never cross paths, while also keeping the lad out of the baddies’ crosshairs.

The only aspect of my two cents that I haven’t hammered down yet — nor am I in a rush to: Is there a specific reason why Felicity hasn’t told imprisoned Oliver…?

That’s all I got, and I could very well be very wrong! (Though I am the guy who, based on next to nothing, predicted that Roy’s Season 7 scenes would be set in the future — asterisk, asterisk, asterisk.) And again, I’m no fan of this theory, in part because it seems too pat, too easy.

Have you been privy to, and bought into, the William as Green Arrow theory? If not, do you have a different idea of who’s behind the mask?