House of Cards ended its six-season run much the way it began: with a mercy killing. In the final moments of the Netflix drama’s series finale, Robin Wright’s steely (and very pregnant) POTUS Claire Underwood stabbed and then suffocated longtime arch nemesis Doug Stamper (Michael Kelly) to death, capping an Oval Office showdown that was as climactic as it was inevitable. The scene served as a fitting bookend to the series’ 2013 premiere, which opened with Frank (Kevin Spacey) “euthanizing” an injured dog with his bare hands. 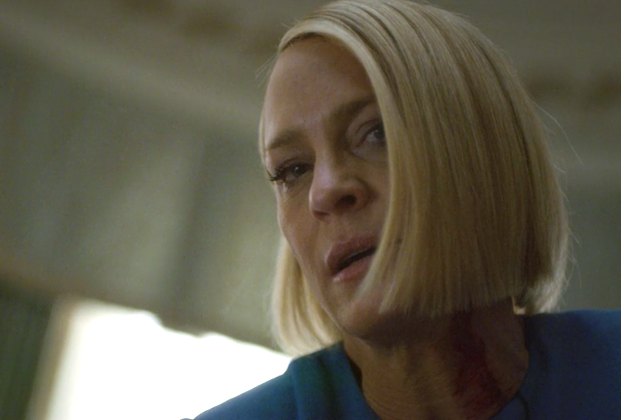 In a recent interview with TVLine, co-showrunner Melissa James Gibson hinted teased that “the last episode of the show would to some degree speak to the first episode of the show,” while also hinting that the endgame would involve Claire and Doug. “They’re each others’ downfall or salvation,” she noted. “And it’s consistently one or the other over the course of the whole season.”

House of Cards‘ eight-episode farewell — which debuted on the streamer early Friday — featured a predictably high body count (R.I.P., Catherine, Tom, Jane), but, in terms of the finale, Doug was the only significant fatality. But make no mistake — a lot when down in “Chapter 73.”

Scroll through the above gallery — or click here for direct access — as I recount the 11 key moments from House of Cards‘ swan song that everyone will (eventually) be talking about.